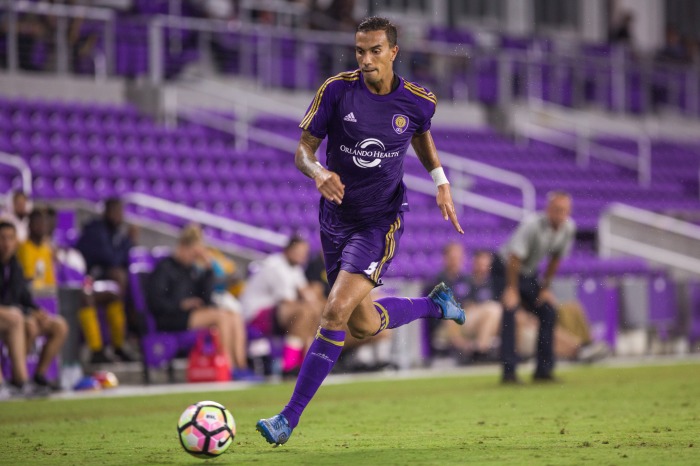 Playing time this year with Orlando City has not come easy for defender Seb Hines.

Recurring knee injuries and dropping down the pecking order in the back line, the 29-year-old Englishmen has had to settle with playing mostly with Orlando City B, the team’s USL side.

With the season winding down and an unclear future, Hines trained with the first team on Tuesday with the hope of making a return one day to the MLS outfit.

Hines’ playing time with Orlando City has dramatically dwindled. In 2015, he made 23 league appearances. That gradually increased the following year with 26 appearances.

In 2017, however, Hines has not played a single minute with the first team.

At the end of the 2016 season, Hines’ contract option was declined by the Lions, but later re-signed with Orlando City in January to a three-year contract.

What followed next for the center back was a series of knee injuries that saw Hines go through surgery in May before returning back to fitness and play on-loan with OCB for most of 2017, where he’s played in 14 games with the USL outfit.

It’s been at OCB this season where Hines has taken more of a leadership role amongst a squad mostly full of young players. He’s the second-oldest in team along with Lewis Neal, 36, being the most experienced player at OCB.

Despite not having played a single minute with the first team this year, his future with the club remains unclear, saying he’s taking it day-by-day.

“You never know with soccer where your future is… you just gotta see what’s in front of you, and keep working hard, and that’s for everyone around the club,” Hines told reporters after Tuesday’s training session.

Hines originally joined Orlando City ahead of its inaugural MLS season in 2015 as a loanee from English side Middlesbrough, and has since began to call Central Florida his home away from home.

With consistent playing at the USL, he said he hopes first-team coach Jason Kreis is paying attention.

“I can only play as well as I can, and that’s what’s in front of me when I play with OCB,” said Hines. “We’ve done really well. We’ve kept clean sheets, scored goals and every game is a game. I always play to the best of my ability and do my best.”

In terms of his knee, Hines said it isn’t 100 percent, nor he thinks it ever will be, but insisted it’s in a really good place right now.

“As long as I’m in the training field, training day in and day out, I’m happy,” he said.