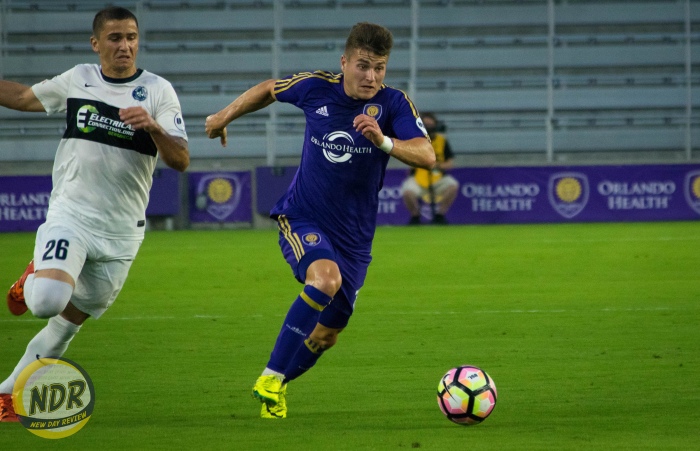 Orlando City B played to a scoreless match against Saint Louis FC on Thursday night at Orlando City Stadium.

“The players deserve a huge amount of credit, a massive pat on the back for the performance they put in tonight on the back of what’s been a really grueling schedule for us,” said OCB head coach Anthony Pulis. “I thought we did everything but score tonight, and if there was one team that was going to win it, it was going to be us.”

That’s because Orlando did not lack scoring opportunities, but struggled to close on the ones they had. Throughout the first half alone the USL Lions (2-3-3, 9 points) outshot Saint Louis 6-2, and created three more shot attempts in the second half while an effective Orlando defense denied any opportunities the visiting side had of getting close.

“Saint Louis is a team that likes to press, they like to counter press and win the ball back as quickly as they can off of the turnover, so we spoke on that and on not taking to many chances in our half because that what their want and they’ll play on it” said Pulis. “So we wanted to see if we could pick up balls a little earlier, and pick up second balls, and kind of get the second phase of the attack going in their defensive part. For the most part I think the guys did well.”

Seb Hines, who underwent a knee surgery last March, was a part of the starting lineup and played of total of 45 minutes. The first team loaned him on Tuesday with the intention of keeping him in shape and getting him some minutes of play.

“It feels alright, it’s been a long time since I’ve been out there playing again, so it was nice to get a little run out and hopefully be normal, no setbacks during the season,” Hines said on playing for the first time since his knee surgery last March.

“It was truly a fitness exercise for Seb, I mean he’s obviously been out for a good number of weeks now, so it was important for him to get the minutes in,” Pulis said. “When you get older guys coming across the MLS team, you want them kind of take a little bit of leadership and kind of communicate with the younger players and almost be another coach on the field and I thought he did that tonight.”

Despite the draw, the OCB players enter a two week break on a positive note, said Pulis.

“The players deserve a huge amount of credit, a massive pat on the back for the performance they put in tonight on the back of what’s been a really grueling schedule for us.”

Orlando City B is back in action on Saturday, May 13 when it travels to take on FC Cincinnati at 7 p.m.