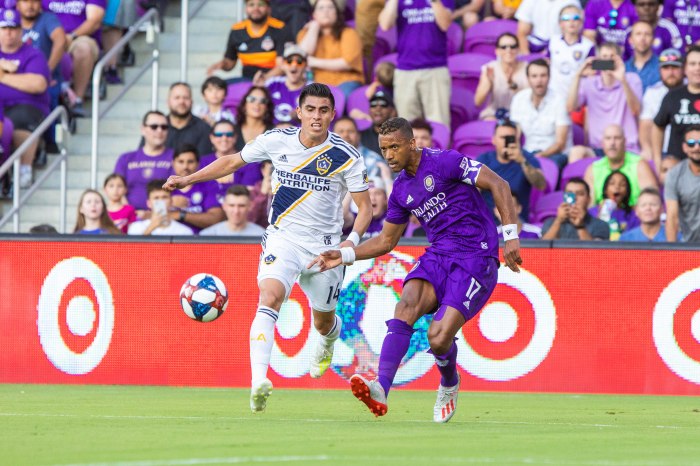 Following his team’s 5-1 rout against FC Cincinnati on Sunday, James O’Connor praised his squad for capitalizing on their chances.

On Friday’s game against the LA Galaxy, however, Orlando City lacked that finishing ability, unable to find the back of the net.

A first-half goal from Jonathan dos Santos was all the LA Galaxy needed to snap their four-game losing streak, defeating the Lions 1-0 in front of an announced crowd of 24,712 at Orlando City Stadium.

Early in the game, Orlando looked dangerous in their chance creation. In the second minute, they got the first opportunity when Chris Mueller’s shot towards goal was saved by Galaxy goalkeeper David Bingham.

Jonathan dos Santos gave Los Angeles (8-5-1, 25 points) the lead in the 19th minute after a bad clearance from Robin Jansson saw the Mexican international blast a shot from outside the box past goalkeeper Brian Rowe.

The Lions could’ve made a fast response to going down just a few minutes later when a cross from Ruan found Mueller, who couldn’t get a finishing touch of the ball.

It was a frustrating night, according to O’Connor, especially Mueller who exited the game in the 83rd minute with two shots on target and one chance created.

“We wanted to win that game very badly,” said Mueller. “Felt like it was really important at home to get the three points, and we threw everything we could at them… it’s really frustrating not to come away with the win, but we just gotta keep moving forward, right? We gotta focus on the next game.”

In the 32nd minute, Orlando was awarded a penalty after Sebastián Méndez was brought down by dos Santos, but Nani’s ensuing penalty kick was saved by Bingham to keep the Galaxy’s lead heading into the halftime break.

In the 67th minute, a ball sent from substitute Sacha Kljestan flew towards the back post, finding Kyle Smith, who able to get a shot on goal, but a goal-line clearance from Perry Kitchen prevented the Lions from equalizing.

Orlando once again could’ve tied the game in the 73rd minute, when a corner kick from Nani connected with Mueller, who headed the ball towards goal but was saved by Bingham.

The Lions were without Dom Dwyer, who did not play due to yellow card accumulation. Los Angeles was without Zlatan Ibrahimovic, who was serving a two-game suspension.

Orlando is not back home until Wednesday, July 3 against the Philadelphia Union at 7:30 p.m.

Saturday at Montreal Impact at 5 p.m. at Saputo Stadium.