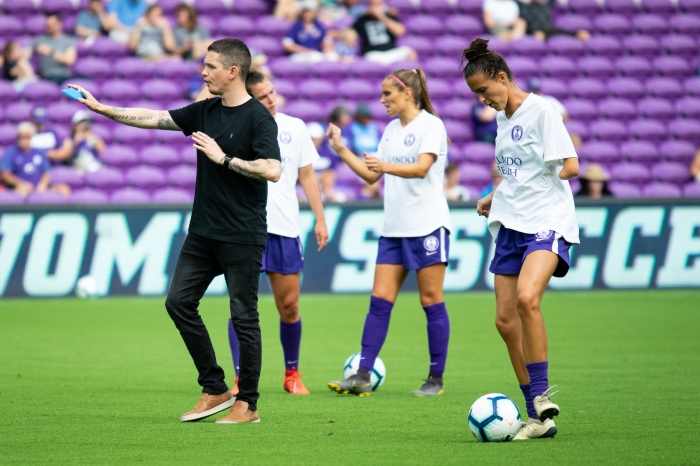 Following the Orlando Pride’s 2-0 loss to the Portland Thorns to begin the NWSL season, Head Coach Marc Skinner and his players did not hold back any punches as they discussed their on-field performance.

“It wasn’t good enough from us,” said Skinner in his post-match press conference. “I think all the things that we looked at doing in preseason we didn’t affect first half. We just didn’t do them. So, we had some words at halftime, we were better second half, but still not good enough. That’s nothing against the players, that’s nothing personal, that’s not me telling the players they aren’t good enough. That’s me saying as a team, as a collective, we were not good enough in that game. Hence the reason we lost.”

Throughout the entirety of the preseason, Skinner has begun to implement a more free-flowing style of play than one that is strictly based off of formation and coming up against a Portland team that has been one of the top teams over the past five years, the Pride struggled to find any consistent cohesion on either end of the pitch.

Despite that, Orlando held Portland scoreless through the first 44 minutes, before a miscue at the back gifted the Thorns a goal right before half. The gift was a fact not lost at all by Skinner.

“The thing I’m disappointed with most is what did they have to do first half? We allowed them to do it. There’s a difference. We’re going to turn this place into a fortress in the future,  but I’m learning fast and fast and fast on what our players do and don’t know already. And that for me is — it’s nothing about the players, it’s not personal — it’s understanding and educating. I don’t think that Portland really had to earn it, they didn’t do anything to earn their victory. I think we gave them the victory today and that’s the disappointing part that I’ll fix very quickly.”

Orlando came out better in the second half, but still could not find an end product, while another defensive lapse allowed for a second goal for Portland.

Goalkeeper Ashlyn Harris, who was very outspoken after the match, said that the response coming out of halftime was better, but it took a tough team talk in the locker room to get them going.

“At halftime we got our asses chewed out. It just has to be better. We have all the tools, we have all the tools. We have an incredible coach that is putting everything on the line, everything on the line, giving us all the tools we have been begging for. It’s now about executing. We weren’t brave enough today and in soccer, you have to be brave on the ball, or these things happen. We will unpack this, we will be better and we have two days to turn around and play again in North Carolina. It’s about how we respond at this point.”

Orlando will now have just two days before they play again, traveling up to Cary, North Carolina to take on the defending champion North Carolina Courage. The Pride played a preseason game back on March 23 against the Courage, which they lost 4-0.

“We move forward now as a team, we unpack this and we’re hungry for North Carolina,” Harris said. “I don’t give a shit if they won last year. Last year is last year. We’re coming for them.”