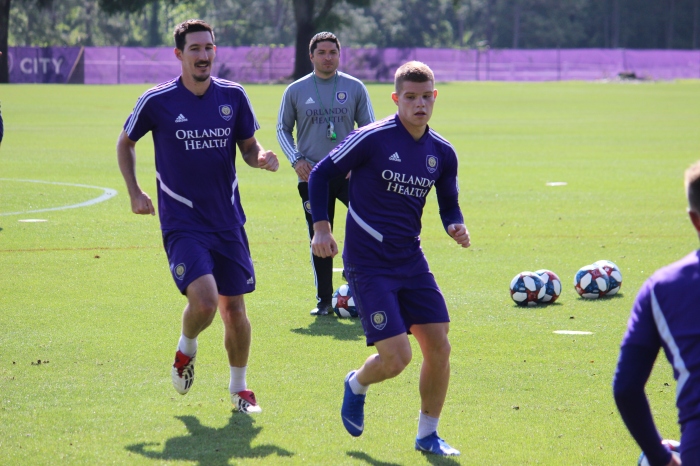 Chris Mueller knows he’s the topic of conversation this early in the 2019 MLS season for Orlando City.

Should he start or come off the bench?

But after an impressive rookie season with the Lions last year, Mueller is focused on not getting too ahead of himself after a sublime display of form off the bench most recently.

“I just try and go about my business every day the same way I do,” Mueller told reporters before Wednesday’s practice. “I try and take away lessons as well from last year [where] there was a kinda similar situation, but I’m really focused on a different kind of way.”

“I want to make sure I’m taking things day by day not getting too ahead of myself,” he continued. “making sure that these times we’re keeping our feet on the ground and remaining to look at the road ahead.”

Since joining Orlando City after four years at the University of Wisconsin, Mueller said he’s gotten to know Central Florida better, which has been a factor to his latest performances this early in the  season.

Last year, Mueller finished with three goals and seven assists in 32 appearances and started in 23 games for Orlando. This season, however, he’s tallied two goals and two assists in five games for the Lions but has only started twice.

Head coach James O’Connor said there’s a hunger from Mueller to want to get better this year, but he isn’t falling into the super-sub hype that’s been the topic of conversation surrounding the forward, adding that he expects his players that come off the bench to make an impact on the game.

“I think people want to label Chris as a super sub, but we have had other players come off the bench and really impact the game as well,” said O’Connor. “For us, it’s not necessarily getting involved in the emotional aspect of ‘OK, is it a super sub? Is it one particular player?’ all the subs coming off the bench, they need to impact the game whether it’s in a defensive way or an attacking way.”

O’Connor acknowledged that every player wants to start every game, but when it comes to Mueller, in particular, he’s noticed the evolution of his game manifest this season and it’s getting better.

But for O’Connor, a key point about Chris is that he’s coachable and able to carry out his task.

“The biggest thing for Chris is the coachability factor,” said O’Connor. “Making sure when he’s going on the field, whether it’s at the start or whether it’s in the game, is that from a technical standpoint, he carries out the things that we’re speaking. He’s done that great, he’s shown great maturity to be able to accept the decisions that we’ve made.”