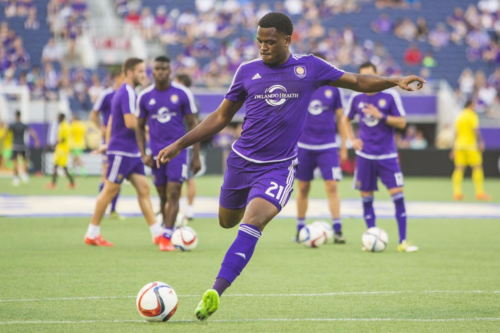 Following national team duty with the Canadian men’s national team and a subsequent four-week hiatus with family and friends, the MLS Rookie of the Year is back to build on his individual success story from 2015.

“[I’m] excited to be back and get ready for the season,” Larin said.

Despite his successful 17-goal rookie season, there is still the concern of the infamous sophomore slump. The 20-year-old isn’t concerned with it; in fact, it’s motivation for him.

“It does motivate me to work harder,” Larin told reporters during Friday’s media availability at Orlando Health facilities. “Just to make sure I’m thinking quicker, and, obviously, moving quicker than the defenders, and picking out the weaknesses so I can score goals.”

Apart from outside motivation, fitness was key for the Lions’ leading goal-scorer. Larin said that if there was one thing he would tell his rookie self before the start of the season, it would be to make sure he’s more in shape.

“If you’re not [in shape], it’s hard to last a game,” added Larin, who played 1,906 minutes in 27 games. “It’s something I’ve been working on this offseason. Now I’m a lot fitter than last when I came here. So going into this preseason, I’ll be a lot fitter.”

But the start of the season can’t come soon enough for the Canadian international. After narrowly missing the playoffs during Orlando City SC’s inaugural season in Major League Soccer, he’s poised to win something for Orlando in 2016.

“I just want to win something with this team, to win something for Orlando,” Larin said. “I think a trophy would be good. And, obviously, I want to score a lot of goals, more than I did [last] year. I know it will take a lot of work to do that, but I’m ready for it.”

In addition to a fresh start, Larin is also excited to play with Lions both new and old; namely first-round pick of the 2016 MLS SuperDraft, Richie Laryea, and midfielder Kevin Molino, who tore his ACL after seven games last year.

“I did tell [OCSC head coach Adrian Heath] to look at [Laryea], and give him a chance,” Larin said about his childhood best friend and former teammate at Sigma FC in Canada. “He’s a great player — a great, talented player, and I think he’ll do well here. [He] fits in perfectly.”

As for Molino, Larin is excited to get more looks from the 25-year-old. In last season’s 2-0 victory over the Portland Timbers, Molino crossed a goal-scoring ball to Larin in the 30th minute.

Personally, Larin said there’s one part of his offensive game he wants to work on.

“[I need to] get my head up more and find my teammates, and get some assists in there,” said Larin, who recorded zero assists a season ago.

The good news for Larin is his assist total can’t get any lower.