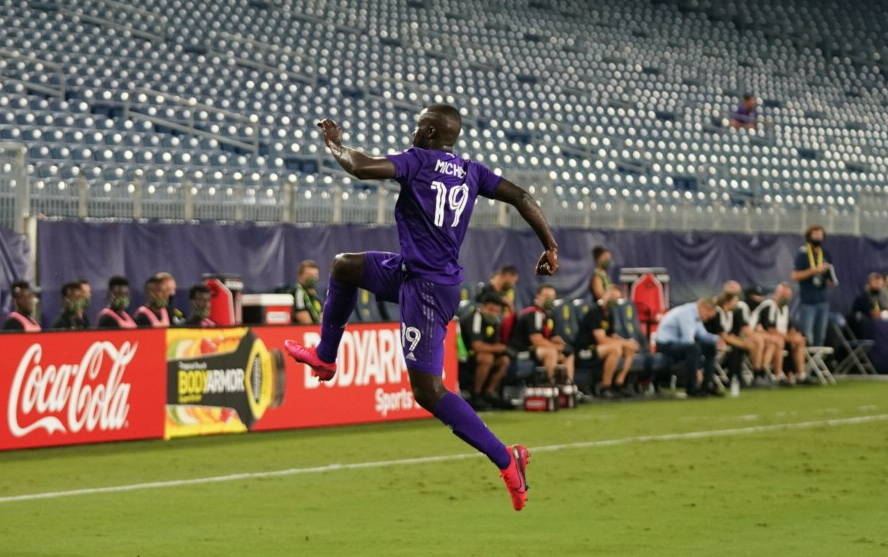 In the final road game of phase one of the MLS restart, Orlando City could not continue their winning streak against Nashville SC as the Lions drew 1-1 Wednesday evening at Nissan Stadium.

“I think they were more aggressive,” head coach Oscar Pareja said (via Zoom) after the match. “They got coupled in in our third, and they ended up just scored, and that was a mistake that kicked us out of the getting the two points today, but we take it. This is a long journey, I say many times and the boys are proud and they will keep going and prepare for the next one.”

Orlando (4-2-3, 15 points) were the first to open the scoring in the 17th minute when Benji Michel scored his first goal of the season, unleashing a rocket into the top corner of the net from outside the box. Mauricio Pereyra, who was back in the lineup after resting last game, was credited with the assist after a flicking the ball past his defender, giving Michel the space and time to shoot towards goal.

“I turned into the pocket and I tried to look for a pass and I saw no one so you know, might as well just shoot it and see what happens,” Michel said of his goal. “And you know, I was fortunate the ball went – it was a banger- so top corner. I can’t complain.”

Nashville (2-4-2, 8 points) looked to be the more energetic side through most of the match and managed to strike back just three minutes after the start of the second half. Hany Mukhtar managed to play a give-and-go with Randall Leal who got in behind the Lions backline to tap one past Pedro Gallese and pull the game level.

“I think as a team we were caught off guard a little bit,” defender Kamal Miller said after the game. ” A little bit lackadaisical coming out of the half and they just took advantage. We knew they were gonna start strong, there was a miscommunication and I was there. I felt like I could have done better to check my man on that one two there, and maybe get stuck in or something to prevent the goal, so I take a little bit of pride in that and go back to training and look at the video and fix that for next game.”

Orlando put pressure on late but saves from Joe Willis kept Orlando from taking the lead and the game ended with a draw.

Lions captain Nani did not travel with Orlando on Wednesday because of load management, according to a team spokesman.

Orlando City returns to Exploria Stadium on Saturday when they host Atlanta United at 8 p.m.