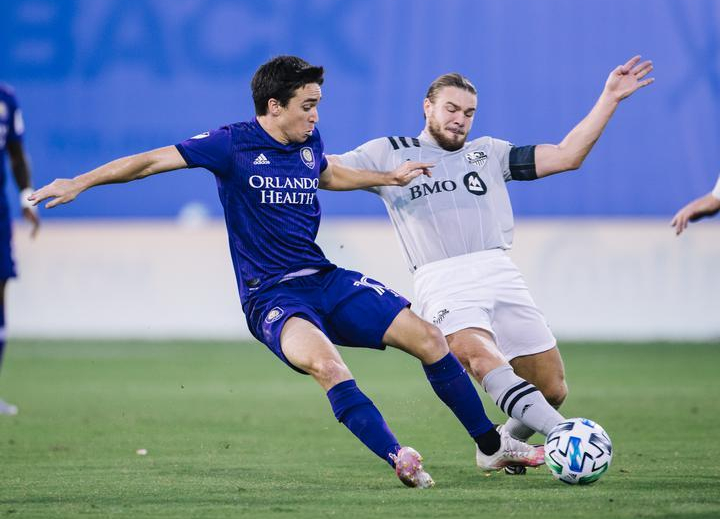 The history of soccer has no shortage of great teams.

From the Herbie Chapman‘s Arsenal teams of the early 1930s, to the Ajax teams of the 70’s featuring Johan Cruyff, all the way to even this year’s Liverpool side that smashed records on the way to its first Premier League title in 30 years.

The 1970 Brazilian national team, which won the World Cup under head coach Mario Zagallo and players like Pele, Carlos Alberto, and Roberto Rivelino, is regarded as potentially the great team of all-time.

If you didn’t know any better, you might have assumed that the Montreal Impact somehow, in 2020, had found themselves in competition with that same Brazilian squad, with the sharpness and flair in which they were moving the ball.

Instead of Pèle it was Mauricio Pereyra. Ruan, not Alberto Carlos, flanking down the right side. And Oscar Pareja was roaming the sideline, not Mário Zagallo.

Should you squint hard enough, the deep purple and black highlighted kits could start to transform into the iconic gold and blue.

Okay, I may be stretching the truth a bit too far here. Maybe absurdly far, as to sully the true quality of that 1970 squad. But what we saw from Orlando City on Saturday night, for stretches at least, was good enough to believe the team could play with the greats — within MLS if anything.

The Lions have played good soccer throughout this tournament, of which the club is undefeated with three wins from four games, including Saturday’s 1-0 victory over the Impact. That win has placed them next into the quarterfinal, where they’ll face probably their toughest test yet; the Lions are currently awaiting the winner of Seattle Sounders versus Los Angeles FC — last year’s MLS Cup Champion against the Supporters’ Shield winner and holder of the league record for most points in a single season.

It only took five and a half years, but Orlando City is finally playing some of the best soccer we’ve seen from the club since entering the league in 2015. And it only took Pareja six games to get there, another encouraging sign is that Orlando has finally found a coach and playing philosophy that will breed long-term success.

“People have asked me about this a lot and I keep saying the same thing, it’s intensity,” forward Tesho Akindele said after the victory over Montreal. “Oscar brings just a different level of intensity than most coaches. The level of the practices is higher, the standards that are expected of us in the game are higher and even off the field these guys are watching video 24/7. They have everything prepared, they have a Plan B prepared, so I think just that intense mindset is infectious and is helping us get results.”

While the Lions lacked finishing quality, they made up for it with their movement of the ball and holding of possession.

Orlando City dominated play throughout the first hold, claiming nearly 70 percent of possession through the first 25 minutes of the match, and racking up passes at intense pace, reaching over 200 within the first 18 minutes, including this 17-pass sequence below from the 6th minute.

Unfortunately, Mauricio Pereyra falls off balance and whiffs on the golden opportunity, but the build-up was definitive of the style that Orlando City wants to play under Pareja.

Quick, short, one-touch passing with plenty of give-and-gos into space, finding little pockets to move the ball into, with the hopes of finding an open winger or fullback on the wings, or pushing through the middle with smart, timely runs from the forwards and midfielders.

The Lions’ attacking shape is essentially a three-back formation, with Ruan typically pushing himself high up the right wing. From there, the play either advances through the midfield trio, involving both the wingers — Nani and Chris Mueller, who both tend to play inside with the fullbacks running around them on the outside. Drawing defenders in, it can open up with space for Ruan and Joao Moutinho to make runs straight up the flanks, or cut inside as well to find runners in the middle — like we saw in the clip featured above.

For the short-falls that Orlando City has at the top of the field — Dom Dwyer was ruled out for the rest of the MLS is Back Tournament on Sunday after leaving the bubble to get an MRI on his left knee — the team is, for the first time, having fun playing soccer, looking like a confident and cohesive group in the process.

“The boys had the personality to put conditions and set the tempo of the game early on,” Pareja said after the match. “We should have scored a couple goals, but those are things we need to improve slowly, but the chemistry within the group was very good.”

Nani looks as good as he’s been throughout his time in Orlando. Mueller is shaping into a real attacking star for the Lions. Pereyra has been a real maestro in the middle of the attack throughout this tournament. Ruan and Moutinho are quietly performing as one of the best-attacking fullback duos in the league. And the defense, which was leaking goal for sport in 2018, has been solid.

Many of history’s greatest teams tend to have some of the greatest players. But as many more can all prove, it’s not necessarily the best players that make the best teams. Great teams can be those that play great soccer, even if the players, on paper, aren’t as good as the other side.

Now, I’m not getting ahead myself — I’m not ready to let four games in a pandemic-induced tournament to erase five years of bad luck, soccer, coaching, performance, and roster management.

But Orlando City is playing some great soccer, and that is enough to believe this might just be the club’s own greatest team in the making.