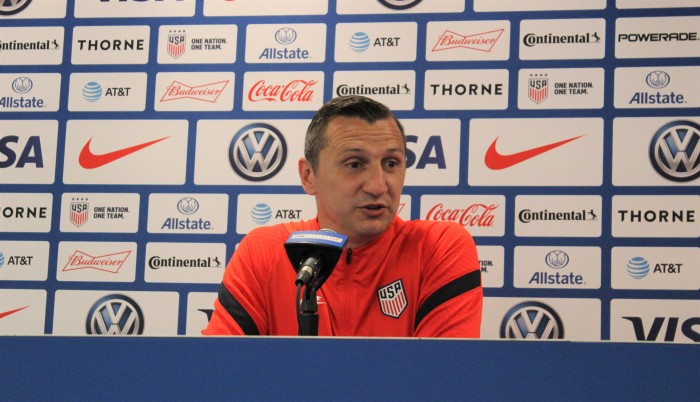 There was much focus on the last time both the U.S. women’s national team and England faced off during Wednesday’s media availability with USWNT head coach Vlatko Andonovski.

The United States defeated England 2-1 during that July semifinal meeting in France, which saw the U.S. advance and eventually win its fourth FIFA Women’s World Cup title over the Netherlands last year.

Both sides, however, will meet again for the first time since their dual last summer as the 2020 SheBelieves Cup commences at Exploria Stadium on Thursday.

For Andonovski, who was appointed USWNT head coach last October, he’s expecting his team to not only treat its upcoming game against England but the entire tournament as a rivalry game.

Following Thursday’s game, the 2019 World Cup Champions will then travel to face Spain at Red Bull Arena on Sunday before closing out the SheBelieves Cup on March 11 against Japan at Toyota Stadium in Frisco, Texas.

Here are some other notes from Wednesday’s media availability at Exploria Stadium:

Morgan not easy to replace

With the absence of Alex Morgan, who’s out due to pregnancy, a question posed to USWNT head coach Vlatko Andonovski was: how do you propose to replace her at the moment?

Here’s what Andonovski said: “A player like Alex Morgan is not easy to replace. She has been great and done a tremendous job for this team in several big competitions, and we expect her to be back. Hopefully, she’s back in, fully fit, and ready to play in the Olympics.

“Ali has done a tremendous job. She played in the qualifiers and we saw that she played three 90-minute games. Very good and helped us win the tournament, which is important, helped us qualify for the Olympics. She has been tremendous and like I said in training, but also her leadership and her experience are also always welcomed in the team.”