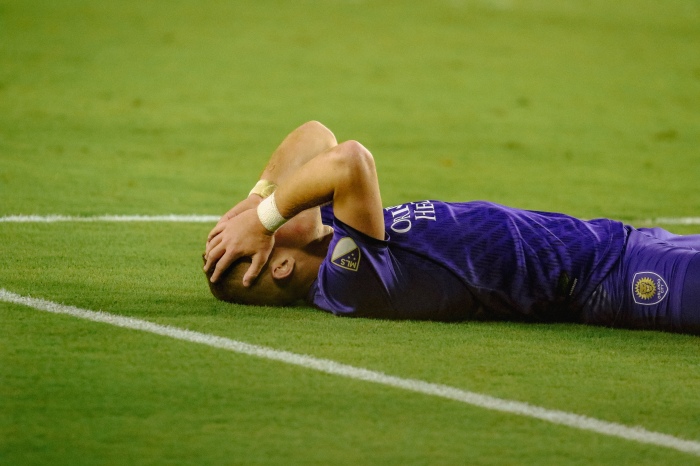 It’s become a theme for Orlando City in their home openers. Despite a good showing in possession and pressure, the Lions fell flat once again their first game of the season, finishing with a scoreless draw against Real Salt Lake.

Despite the lack of finishing, Orlando looked composed on the ball for most of the match, but the final 15 minutes became a bit nervy when RSL began to bring some of their attacking threats off the bench. The Lions managed to hold out and earn a point in their first match of 2020.

If that isn’t the understatement of the year, Orlando had nine total shots in the match, with only two of them on target. Chris Mueller missed a golden opportunity in the 83rd minute, while Júnior Urso missed two from inside the box.

“We had our chances,” Mueller said after the game, “We created the chances that we wanted and we had everything there for the taking. I think that in reality, we’re going to focus on our game and where we can improve.”

“I think that the team created a lot, I thought we moved the ball well, I think we could have had a little bit more quality in the attacking third, a little bit more patience on the ball to circulate and maybe find a better pass, me included, but I think that we all better improve and learn and focus on the next game”

Missing Dom Dwyer and Nani was always going to be a challenge coming into the game, but it was clearly evident that this team needed some more attacking-minded players that made runs for goal and attacked the ball.

The midfield glue needs to keep the team together

The midfield duo of Sebas Méndez and Júnior Urso will be key cogs for this Orlando City team as they go through the season, but last night was their first test. Both had moments of brilliance and poor decision making, but Head Coach Oscar Pareja believes they will be the key to keep the team together throughout the year.

“They understand that they are the one to glue our team, defensively and offensively,” Pareja said, “The minds, the energy, the effort that they put in that part of the field is very great and very healthy for our team so good game from them and the whole team played well, but Sebas and Urso, they gave us a lot of personality in that part of the pitch.”

Urso even spoke after the game in relation to what his coach has been telling him.

“He says you’re the heart of the team, so I believe that the middle is. We have to connect the defenders to the attack. So I think the game is like this, the middle controls the game so today I think we played well, but we can be better. I saw the team in the preseason, I think we can be better but it’s okay, it’s the first game.”

History continues to repeat itself

Orlando just can’t seem to escape from their history with home openers. Since 2015, five of the six home openers have ended in a draw. 2017 was the outlier when the Lions won 1-0 over New York City FC to christen the new stadium. Outside of that, games have finished, 1-1, 2-2 and now for the first time, 0-0.

This was the first time in six seasons that Orlando has failed to score a goal to open up a season. On the flip side, this was the second time the Lions held a team to a shutout, so a double-edged sword for those stats. We’ll have to wait for next year to see if they can change the theme.