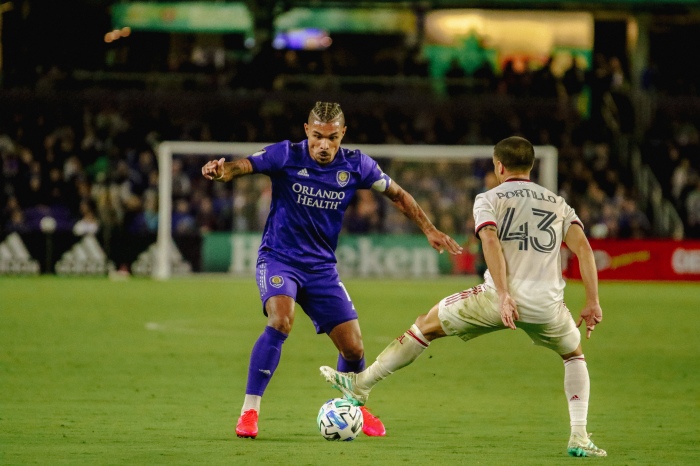 Orlando City was the dominating team, but couldn’t find the back of the net on Saturday.

Playing in their 2020 MLS season opener, the Lions played to a 0-0 draw against Real Salt Lake in front of an announced sellout crowd of 25,527 at Exploria Stadium.

Orlando head coach Oscar Pareja, however, was pleased with how his players performed in the evening despite being without captain Nani and forward Dom Dwyer.

“We leave with a sensation,” Pareja said shortly after the game. “It could have been much more and give them the three points because our fans deserve it tonight. The way they came into this stadium, it gave us that energy. That was transmitted to our player. They were very high and very happy about the support that we felt today. Hopefully, we can give them more often than three points.”

Early on, in the fifth minute, Mauricio Pereyra played a ball to Tesho Akindele making a run inside the box, but couldn’t get a final touch on the ball before being brought down.

The Lions, who implemented a high-press, continued to knock on the door when Ruan made a dashing run down the right flank before cutting into the box, sending a cross intended for Chris Mueller, but was cleared out by an RSL player in the 17th minute.

Orlando outshot Salt Lake 9-to-5 and dominated possession for much of the game with 50. 7%.

In the 73rd minute, Pereyra picked out Mueller inside the box, but his strike from close was denied by RSL goalkeeper Zac MacMath.

Mueller, again, could have opened the scoring when Pereyra played a long ball to Robinho, which then found Mueller to strike from outside the box — with MacMath outside his line — but that attempt went over the crossbar in the 83rd minute.

“We had our chances, we created the chances that we wanted,” said Mueller. “We had everything there for the taking. I think that, in reality, we’re going to focus on our game and where we can improve.”

Junior Urso was named captain on Saturday for Orlando with Nani serving game one of his two-game suspension.

The Lions were also without Dom Dwyer (lower-body injury).

For Pareja, though, working on the final third will be an area of improvement heading into next week’s game at Colorado Rapids.

“In the final third, we need to have precision,” said Pareja. “Sometimes it falls mostly on talent and what the players can develop there. Tonight, we didn’t have the moment to do that, but I believe in them and I believe that they will solve that because they have the talent, they have the energy and sometimes in soccer, creating scoring chances isn’t easy — they did that today but it’s a matter of working on that precision.”