The 2020 season will once again see a plethora of new faces hitting the field for Orlando City, including one that seems new, considering how little time he was able to spend on the field last season.

Mauricio Pereyra signed with Orlando City at the end of July, but appeared in just six games for the club — picking up three assists and totaling just over 400 minutes. He joined the Lions without a preseason and little time to prepare after his club season in Russia ended in May, and because of that, he didn’t make his first start until three weeks after signing.

The Uruguayan ended up not playing more than 63 minutes until September 29, the penultimate game of the season. He also suffered an injury after one of his first few games that kept him out for a longer period of time.

Now with actual time to prepare himself for the full season, Orlando City is hoping that No. 10 will be the No. 10 the Lions have been missing since Kaka left after 2017.

“I think this season I have no excuse now to play,” Pereyra said at media day on February 13. “I know that last year it was difficult to get adapted without the preseason, but this year is good.”

Chance creation was a tough area for the Lions in 2019, with the biggest deficiency coming in the midfield — Sacha Kljestan led the way with 22 key passes (passes that led directly to a shot), followed by Will Johnson at 13; third was Pereyra, who landed 12 of those key passes, enough to land him 8th overall on the team despite playing significantly fewer minutes than everybody above him. 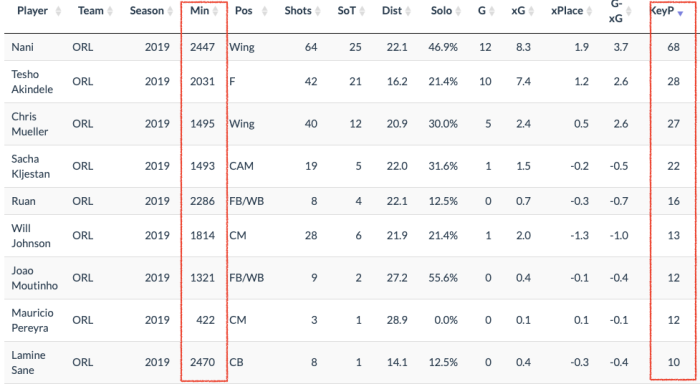 Orlando City needs Pereyra to step on the field on February 29 and hit the ground running with that same level of production from the opening the whistle, carrying it throughout the season, if they want to make the playoffs (of course, that means the players on the receiving ends of these key passes doing their part and converting those chances, which they also didn’t do nearly enough of last season).

While Oscar Pareja is looking for Pereyra’s play to set the example, both he and Mauricio see an opportunity for a larger leadership role within the squad. Pereyra has worn the captain’s armband on occasion this preseason, stepping into a Vice-Captain role for the Lions following the losses of both Kljestan and Johnson this winter, two key voices within the squad over the last few seasons.

“I think Mauricio will have the leadership that we need, and obviously there are a couple of players also that can help us in that,” Pareja said recently. “Mauricio, with his experience, can help with the ideas that we would like to develop. Again as a leader, he seems like he can wear that armband like he did yesterday. What I have seen in the field, he’s a player that can have a lot of control of the middle of the field; he’s smart, he reads the game. I see him as somebody who can help us fill a couple different positions and he will help us justify the models that we need throughout the year.”

Pereyra, the player, agrees with his new boss and understands that his years of experience across the pond in Europe can serve as a useful tool to his teammates.

“I think because of my age and my experience in Europe before, I need to take these responsibilities too,” Pereyra said. “I know we have important players like Nani, [Dom] Dwyer and they have more time here in the team, but of course, if I could help the team with some advice for the young players I will be ready to give it to them.”

Advice, line-breaking through-balls and over-the-top passes in scoring areas, anything and everything that Pereyra can give the Lions this season could go a long way towards breaking years of disappointment and disfunction to finally deliver a playoff appearance to Orlando in 2020.