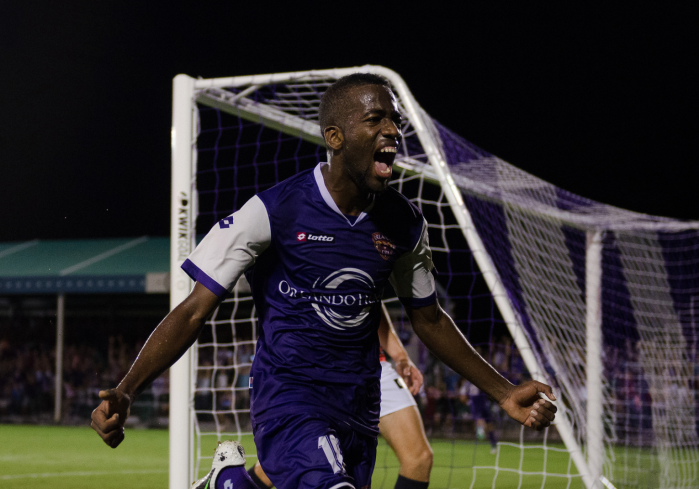 It’s hard to believe a decade of Orlando City has gone by.

From the USL days to MLS, we’ve seen a fair share of players don the purple kit for the Lions, but the players we’ve selected below truly are what sets them apart from the rest.

Here’s to the next decade of Orlando soccer and here’s the staff-elected Orlando City Team of the Decade.

G: Miguel Gallardo: Arguably the heart of the Lions during the USL days. Gallardo rocked the purple kit from 2011-2014 and won several titles with Orlando during his time, including the 2011 and 2013 USL PRO championship; 2011, 2012 and 2014 USL regular-season titles. Gallardo is the only player to make the most appearances as a goalkeeper with 96 games played — all starts. His involvement with the Lions continues to this day, serving as a club ambassador and part of the team’s broadcast team.

D: Mechack Jerome: A tough pick between Jerome and Scott Sutter, Jerome was an integral piece to the Lions defense in USL for the first two years. Eventually picked up by Sporting Kansas City in 2013, Jerome managed two goals and five assists in 42 games played for Orlando mostly as a fullback, but occasionally shifting to centerback. Jerome was part of a defense that only let up 16 and 18 goals in the two seasons he was with the Lions which is what earns him the nod for this team.

D: Rob Valentino: The rock of Orlando City’s defense through all of USL, Valentino is by far the best center back that Orlando has ever had. Playing in the heydey of the team, the defender played in 91 games for the Lions, scoring 14 goals (the most for a defender in Orlando City history) and adding one assist. He was one of the emotional leaders on the pitch as well, commanding the back-line alongside Gallardo to allow less than 20 goals a season and only 84 over the course of four years.

D: Robin Jansson: Valentino aside, center back was the hardest position up for debate by the OSJ staff. Orlando’s history of start-quality center backs is short and without much substance, but after much consideration, we decided to give the nod to Jansson, who despite only having one season with the club under his belt made and impact on the field for Orlando City in 2019. As a part of the Lions’ best defensive season in their MLS history, Jansson made 32 starts across all competitions (28 in MLS play) and was a staple on the backline alongside Lamine Sane.

D: Luke Boden: Bodz, as he’s commonly known, was one of the few players that made the jump from USL to MLS in 2015. Boden dominated mostly as a left-back and was one of the best at that position during the 2013 USL season, which saw the Lions capture silverware that year. The crafty fullback leads all Orlando City players in appearances, with 150 between USL and MLS. He managed seven goals and 24 assists in his time with the Lions.

M: Cristian Higuita: The longest-tenured player during Orlando City’s MLS era, Higuita was with the club through all of its first five seasons in the league, making 108 appearances across all competitions. Despite his history of being injury-prone as well as a liability on the field (two red cards and 39 yellow, with a few accumulation suspensions in there), Higuita was one of the most impactful players on the field for Orlando City as one of the top defensive midfielders in the league.

M: Yoshimar Yotún: The Peruvian joined the Lions during the summer transfer window in 2017, but really took off the following season with 10 assists and four goals, which helped in getting called-up to the Peruvian national team for the 2018 World Cup in Russia. What was unique about Yotún was his versatility. While he played mostly in the center midfield, Yotún made regular appearances at left-back or left midfield and had a great ability in sending good-targetted long balls across the field. He finished his tenure with the Lions having scored six goals and adding 14 assists in just 32 total appearances. His assists mark is fourth all-time in Lions history and second in MLS.

M: Kevin Molino (Player of the Decade):  Arguably the best player for Orlando City in the team’s history, Molino joined the Lions back in 2011, garnering USL MVP that year. He was the record holder for USL goals in a season in 2014 with 20 and was one of the first players to sign with the MLS team from USL. Molino’s MLS tenure was rough to start, but 2016 was the year he shone the most. In his career with Orlando, Molino has appeared in 144 games, having scored 42 goals and adding 30 assists. (30 goals, 21 assists in USL). Molino sits third all-time in goals scored (second all-time in USL and fourth in MLS).

M: Kaká: The Brazilian legend may have only played three seasons (2015-2017) for Orlando, but played a major part in the club getting international recognition. Even past his prime, Kaká still managed to muster magic during his time with the Lions. In all, Kaká finished his time with Orlando with 25 goals and 22 assists in 74 league matches. He is third all-time in assists and sixth all-time in goals.

M: Jamie Watson: A fan-favorite from the USL days, even now with some of the original supporters, Watson was the most recognizable face of the franchise from 2011-2013. Each year with the Lions he was top three in goals scored on the team and currently sits 3rd all-time in USL goals scored and top 10 overall. His 25 goals and 14 assists were not all that made him memorable for the Orlando faithful. It was his connection to the fans and to the community, one of the big parts of how the team developed the culture in USL that got them to MLS in the first place.

F: Cyle Larin: Orlando City’s first draft pick in Major League Soccer, as well as their most successful pick to date, Larin left Orlando in 2018 as the club’s all-time leading goal-scorer in both USL and MLS (before Dom Dwyer passed him for that title in 2019). Larin took the league by storm in 2015, blowing past the previous rookie record for goals in a season (12) with 17. Larin left with 44 goals and six assists across 89 appearances. His consistency for racking of up goals in such a short span of time made him our clear choice for Orlando City’s top striker of the decade.

Thanks for following us this year and for the latest soccer news, follow the Soccer Journal on Twitter: @osjsoccer