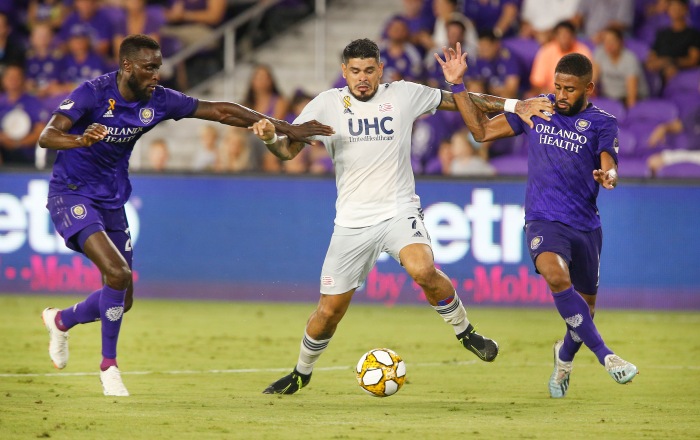 With their backs against the wall and no room left for error, Orlando City had to claw their way back to earn a 3-3 draw in a six-goal thriller with the New England Revolution on Saturday night at Exploria Stadium.

For the third game in a row, the Lions conceded inside the first 15 minutes of the match when Tesho Akindele knocked the ball into his own next, putting the Revs up 1-0 with an own goal in the 15th minute.

Orlando was quick to turn things around and put the ball in New England’s goal when Nani, for the second week in a row, scored to level the game with a goal in the 22nd minute to make it a 1-1 game. Mauricio Pereyra served in the corner kick to find the captain, who flicked the header on target past Matt Turner.

But New England scored twice in the final 10 minutes of the first half to take a 3-1 lead into the halftime break. Cristian Penilla put the Revs ahead in the 35th minute and Gustavo Bou doubled the lead in the 41st.

The Lions charged back quickly after halftime, pulling a goal back in the 47th minute, when Dom Dwyer flicked on a headed goal from a Nani cross, scoring his first goal since early July. And then Nani added his second of the night in the 54th minute to tie the game up at 3-3.

Both teams traded quality chances throughout the rest of the match, with New England coming up with a pair of big chances in the closing moments, but neither side could break through to find the three points.