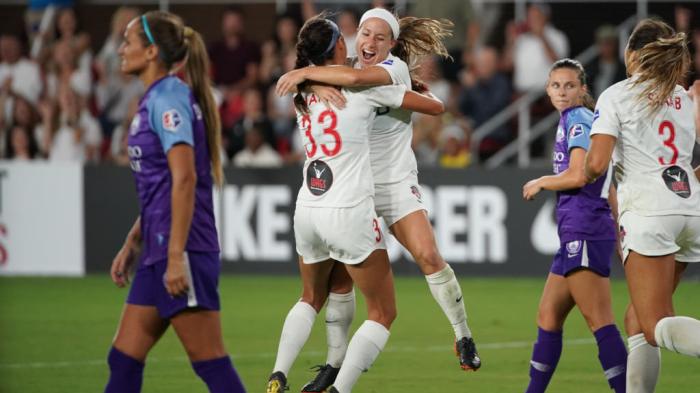 Defensive lapses continued to be a problem for the Pride this season, especially this weekend.

Crystal Thomas capitalized on a howler in the first half, and Ashley Hatch was left unmarked in the second as she sealed the Washington Spirit a 2-1 victory over the Orlando Pride Saturday night in front of a sellout crowd of 19,471 at Audi Field.

Crystal Thomas opened the scoring for the Spirit in the ninth minute when she dispossessed Ashlyn Harris inside the box for the easy tap in.

But Marta, who was returning from a two-game suspension, equalized for the Pride in the 31st minute after finishing a cross from Rachel Hill past Spirit goalkeeper Aubrey Bledsoe.

Ashley Hatch scored the go-ahead goal, and eventual game-winner, when she headed a ball from Tori Huster past Harris in the 59th minute.

Orlando (4-12-2, 14 points) almost found the equalizer in the 71st minute when a cross from Ali Krieger found Rachel Hill, whose shot from close range was stopped by Bledsoe.

Erin Greening went down shortly before the 69th minute with an apparent knee injury and was officially substituted moments later in the 72nd minute by Abby Elinsky.

Cheyna Matthews almost made it 3-1 for the Spirit when her shot from inside the box curled and hit off the right post in the 79th minute. Moments later in the 81st minute, Kristen Edmonds sent a cross inside, finding Marta who hit the ball off the crossbar.

Bailey Feist came close to putting the game away for the Spirit in the 88th minute when she managed to turn inside the box, past two Pride defenders, striking the ball towards the target but Harris

In the second minute of stoppage time, a cross sent from Claire Emslie found Hill, who headed the ball towards the net, forcing Bledsoe to dive to make the game-winning save for the Spirit.

The Pride entered Saturday’s game against the Spirit with a 2-1 win on Wednesday against the Chicago Red Stars.

The Pride takes on the Spirit again on Saturday, this time at Exploria Stadium. Kickoff is at 7:30 p.m ET and will stream live over at Yahoo! Sports.