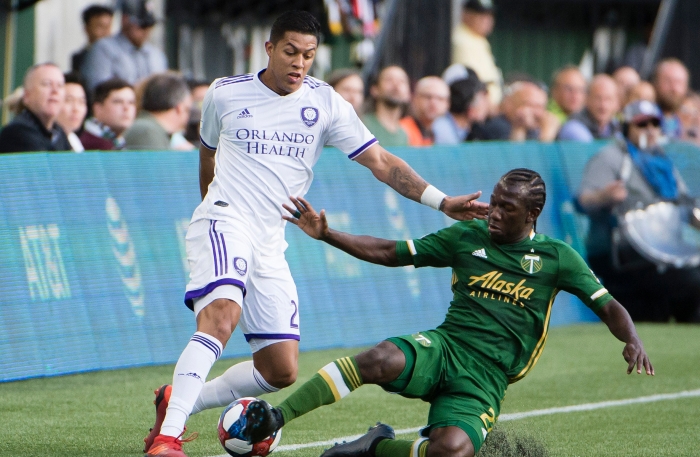 Rolling out a squad mostly made up of reserves and having to substitute a centerback just 10 minutes into the match, Orlando City persevered through the full 97 minutes of Thursday’s match at Providence Park to pull away with a 1-1 draw against the Portland Timbers.

“Very proud of the players,” Head Coach James O’Connor said after the match, “I thought we defended really well, I thought there was a great togetherness to the team. Look, they’re a very good team, the Timbers, and they put us under a lot of pressure, but by in large we coped really well and defended excellently. We made it very difficult for them to come in and get the three points.”

The Lions had a bit of an inauspicious start to the game when in the 8th minute, Alex De John took a boot to the face as Briann Fernandez tried to get to a ball. That contact knocked DeJ ohn out cold for almost a full minute as trainers rushed the field to tend to him. With no other centerbacks on the bench for Orlando, Will Johnson came in and Kyle Smith shifted centrally to fill De John’s position.

Portland continued their dominance through the first half, but it was Orlando that struck first right on the stroke of halftime.

Right on the 44th-minute mark Portland’s Zarek Valentin essentially gave up on a ball near the end line, thinking it would roll out for a throw, but Orlando’s new man Robinho managed to keep it in play and create a counter-attack chance for the Lions.  As he crossed the ball in, Jorge Moreira cleared the ball right to the foot of rookie forward Santiago Patiño, who stuck the ball in the back of the net, giving the away side a 1-0 lead at the half.

The second half was much similar to the first. Portland had an abundance of crosses into the box, but Orlando’s makeshift defense did well to hold them to be mostly harmless. It took until the 82nd minute for Portland to find the back of the net when Patiño played a square ball to Benji Michel, but Diego Valeri intervened and started a counter. Moreira got the ball, crossed into Fernandez, who headed the cross right to Jeremy Ebobisse to flick on goalwards, off the post and in.

After seven minutes of stoppage time, Orlando managed to get out of Providence Park with a point, despite being outshot 25-2, though only four of those Timbers shots were on target. A tremendous effort from the Lions backline preserved a draw on the road, as the team heads back to Orlando to play another game in just three days.