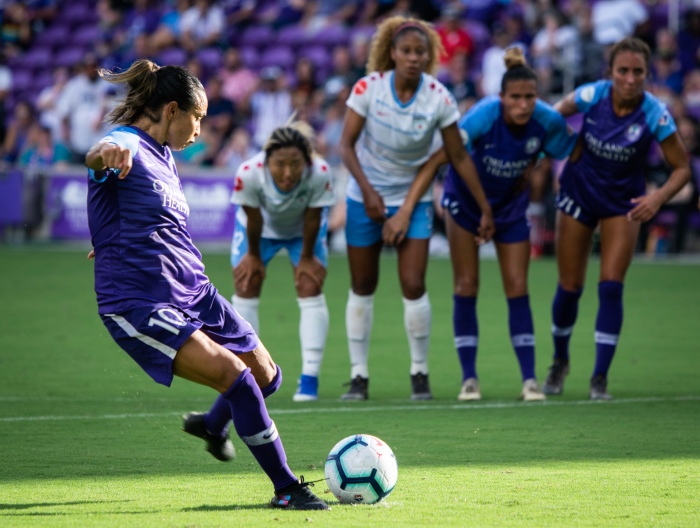 Saturday will be a busy day for the Orlando City Soccer Club family with the NWSL side, Orlando Pride, hosting the Washington Spirit at Exlporia Stadium at 7:30 p.m. ET on Yahoo! Sports)

Orlando City, on the other hands, gets underway against the Philadelphia Union at Talen Energy Stadium at 7 p.m. ET on My65, YouTube TV, ESPN+.

Both sides are looking to rebound from home losses over the past week as the Pride dropped a 3-2 game to the Chicago Red Stars last weekend while Orlando City fell to the Union, 3-1, on Wednesday night.

“We’re expecting another tough match against a tough and very well coached opponent. Obviously, an interesting dynamic of just having played a team and having to turn around and play them again three days later,” Lions head coach James O’Connor said after Wednesday’s match. “I think the big thing for us is to be sharper heading into Saturday but to also be mindful of managing the situation looking at the volume of games we have ahead in this short period of time.”

Orlando City (6-9-3, 21 points) went up 1-0 over the Union early on thanks to a Chris Mueller goal in the eighth minute, but Philadelphia (10-5-5, 35 points) leveled the score in the 32nd minute. Robin Jansson was sent off with a straight red card after VAR review just before halftime, then the Union scored two goals in the opening 10 minutes of the second half to take a 3-1 lead. Sacha Kljestan was also sent off later in the match with after a rough tackle from behind on Jamiro Monteiro.

Both Jansson and Kljestan will be suspended for Saturday’s match.

The Lions did have the benefit of their international players being back for Wednesday’s match, with Sebastian Mendez and Will Johnson both returning to the starting lineup after international duty for their respective nations. Dom Dwyer, who missed several matches in June with a hamstring injury, also returned to the field as a second-half substitute.

Orlando City comes into the match having won four of their last six matches across all competitions. At Talen Energy Stadium, the Lions have won two of their five all-time matches, including their only trip to Philadelphia last season, 2-0 back in April.

Meanwhile, for the Pride, Saturday’s match will be the first of three meetings between the two sides this season.

The Pride up their first victory of the season on June 22 against Sky Blue FC before dropping last weekend’s match against Chicago, which included a Sam Kerr hat trick and goals from Orlando’s Marta and Chioma Ubogagu.

Now the Pride turns their attention to the Spirit, which currently sits in second place in the NWSL standings. The Pride have all of their World Cup players back, except for the United States group, with Alanna Kennedy, Emily Van Egmond and Shelina Zadorsky all returning to the squad for today’s match.

The Spirit, despite the strong campaign to this point, are coming off a loss of their own after dropping a 2-1 result against the North Carolina Courage last week.

“In my opinion, I think they’re [Washington] probably the best team from playing out from the back. I think they’re excellent, I think they’re doing a great job over there. I think they have fresh, young players,” Pride head coach Marc Skinner said this week. “They’re very, very good and I think we’ve got to be excellent to beat them on the day and I think that we can do that, we’ve just got to make sure we’re on our money when we play them. Good team, they’re coached well and I’m really looking forward to the challenge.”