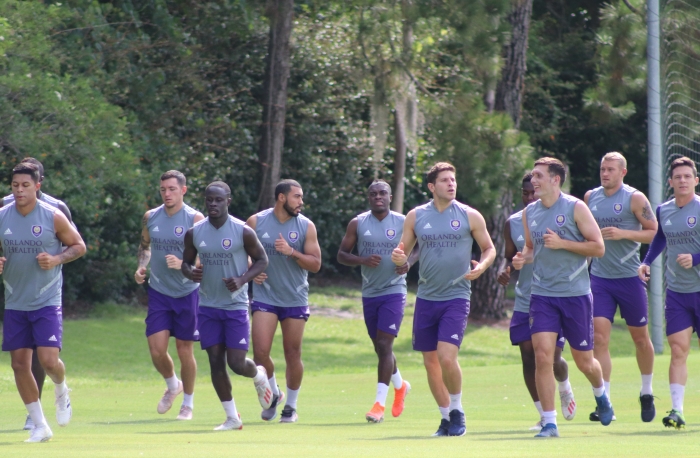 After posting a 4-1 record across all competitions in June, Orlando City looks to continue riding that momentum heading into July, starting first against the Philadelphia Union on Wednesday at 7:30 p.m. at Exploria Stadium.

The Lions begin another long stretch that has them playing four games in 11 days, which include back-to-back league games against the Union on Wednesday and Saturday, followed by a midweek U.S. Open Cup quarterfinal match at home against New York City FC on July 10.

Orlando concludes its long stretch of games on July 13 when it hosts the Columbus Crew at home.

For head coach James O’Connor, however, it’s about managing correctly how he’ll deploy his men during those load of games.

“When you have a lot of games, you have to try to manage load,” O’Connor told reporters during Monday’s media availability. “I think that’s probably the biggest thing. So obviously, [we] got back yesterday from Columbus… it’s a case of just managing the players and who’s got aches, who’s got pains and just seeing who is in a position to be able to go again and who needs rest.”

Orlando City posted its fourth shutout win of the season during a 2-0 victory over the Columbus Crew at MAPFRE Stadium last Saturday.

Forward Tesho Akindele feels good about the current scoring form he’s in but credited his teammates instead on his current run.

“I’m feeling pretty good,” said Akindele. “I’ve been getting the goals, but I think a lot of it has been hard work on other people’s parts. I’ve been [in] the right place, right time and finishing the job, so I want to give a lot of credit to my teammates for setting me up and putting me in really good positions.”

The Canadian international scored his fourth goal in his last five league games, which totaled his goal count to six goals this season for second-best behind Nani’s team-leading eight.

Across all competitions (MLS, Open Cup), Akindele has seven goals in 15 games.

João Moutinho and Cristian Higuita, both who are out with hamstring injuries, are not expected to suit up this Wednesday against Philadelphia.

According to O’Connor, Wednesday’s game versus the Union is “too soon” for Moutinho. Higuita is still expected to miss a couple of weeks, a team spokesperson said.

Dom Dwyer, who suffered a hamstring injury last month, is expected to be ready, said O’Connor, but did not say what role the striker will play.