Orlando City is heading into the Gold Cup break tied on points with the 7th place Toronto FC, but outside of the playoffs by just two goals (goals for is the third tiebreaker being used in this case because Orlando and Toronto are tied on the first two, total wins and goal differential).

Considering how most around the league saw Orlando finishing no higher than 10th place, the first three months of the season have been an overwhelming success.

Orlando is showing signs of improvement both defensively and offensively. James O’Connor has his team on the edge of being really good in a weakened Eastern Conference and on pace to finish with its second-best point total since entering MLS (it’s a low bar, but a bar nonetheless).

Saturday’s 3-0 win over the Montreal Impact, the third best team in the East on points coming into the weekend, was a dominating effort that is sure to please fans and quiet O’Connor’s doubters after the team came into the match sporting a 1-4-0 record over their last five games.

As you’ve probably read once or twice before in my columns on this site, the results don’t do Orlando City justice in just how far they’ve come and how well they’ve been playing over the last several weeks, and the Montreal game showed how all of it looks when it comes together and the team finally puts away its chances.

The three-headed monster in the midfield

I get a lot of complaints on Twitter about the team fielding three defensive midfielders on a weekly basis (I don’t make the lineups!) when it’s struggling to find creativity in the midfield, and while I would love to see Orlando City have their own version of pre-2018 Sacha Kljestan or Miguel Almiron dictating play and stringing passes in the midfield, they just don’t have that kind of player and so they have to cope for it with what they have.

O’Connor wants his team to play with possession up the field, win the ball back and do it by pressuring opponents with a Press Lite system, and guys like Sebastian Mendez, Cristian Higuita, and Will Johnson are good at swarming players and winning the ball back.

On Orlando’s second goal, Nani plays a key role in applying fast pressure on Micheal Azira before he slips up a pass to Omar Browne. In comes Higuita to steal the ball before Browne even has time to react and now Orlando has a 3-v-2 and makes it a 2-0 game.

Orlando’s created a lot of chances on moments like that this season when their midfield collapses up and can force a quick turnover.

Where the midfield we’ve seen lately has shown another impact has been directly influencing Orlando City in the run of play. I highlighted a moment a couple of weeks ago against Cincinnati early in the match where Orlando knocked around a handful of short passes on a build-up and nearly led to a direct shot on goal, and it’s something we’re starting to see more regularly.

Mendez, Higuita, and Johnson are great short-passers. All three are good at moving the ball quickly, not just side-to-side but up the field as well — the kind of quick passing drills we see in training, those are being brought to the field in matches. As I’ve said before too, we’re starting to see Orlando become more dynamic in their attack, moving the ball in more ways than just getting it to Joao Moutinho and Ruan.

On Orlando’s third goal of the day, that shows. The Lions live on getting the ball out to the wings, and here they pull Montreal’s defenders around just long enough for Moutinho to find his lane on the left side in a 22-pass goal sequence.

This honestly might be the best team goal Orlando City have ever scored. Gorgeous. pic.twitter.com/4qMfdkm8l5

One more example: this is directly off a free kick. Nani drops in about 15 yards to receive this ball from Mendez, bringing two players in with him and then out and up the left side. Two more players close in on Moutinho, setting up Mendez, who forces a fifth different defender to close in up the field. Now Higuita is free to set up a quick lay off back to Mendez. At this point, Montreal has six players on the left side of the field and nobody on the acres of open space around Johnson, who maybe could have done something else with the ball here but goes for the open shot instead.

There were great examples of Orlando City’s improved ball movement outside of the Will Johnson goal too. Eight different players get involved in this sequence before Johnson takes the shot. An excellent build-up. #FaceOfCity pic.twitter.com/DX0BZJ3V1N

A lot of quick, one-touch passes. O’Connor’s teams in Louisville were really good at this exact kind of thing, and he’s finally been able to implement it within his team here in Orlando. This is only the beginning of what we’re going to be seeing.

Not every team is going to be as easy to control in the midfield as Montreal, and even Montreal was having a bad day for themselves, but when the balls moving like that for Orlando, they’re able to create chances without one or two players solely making things happen.

We can’t do anything about how long it took Cristian Higuita to become a regular face in Orlando’s starting lineup this season except just appreciate how well been in becoming one of the top influences in games lately.

Let’s take a moment to compliment the defense. The third shutout of the season and this one did not come easy. The Lions’ let off the gas in the second half with the big lead, which let Montreal put on a ton of pressure, but the team stood strong and saw out the clean sheet. 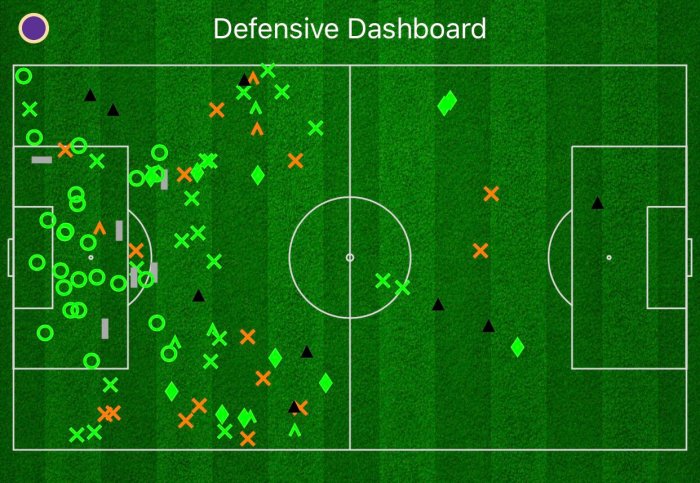