Orlando City dropped another one Friday night with a 1-0 loss to the LA Galaxy at Orlando City Stadium. Jonathan dos Santos opened the scoring with a strike from outside of the box in the 19th minute and that was all the Galaxy needed to snap a four-game losing streak.

The Lions, by most measures, dominated the match and looked like the better team throughout the night, but their season-long issue of struggling to finish, along with Nani’s saved penalty kick near the end of the first half, hurt Orlando to the point of wishing the team saved a couple of those goals from their 5-1 win over FC Cincinnati for this Friday night matchup.

Here are five takeaways from the match.

A little tactical food for thought for you this week going off something I noticed on LA’s lone goal. Orlando City has let in just two goals over their last two games, which is great and backs up the belief that the team is playing well defensively this season despite the results, but it’s how they’re defending when both of those goals are scored.

On both goals, Orlando City has at least seven players in the penalty area either playing the ball or making in the box, but in both cases, there’s nobody outside the penalty area in spots to defend the multiple players hovering outside of the box. 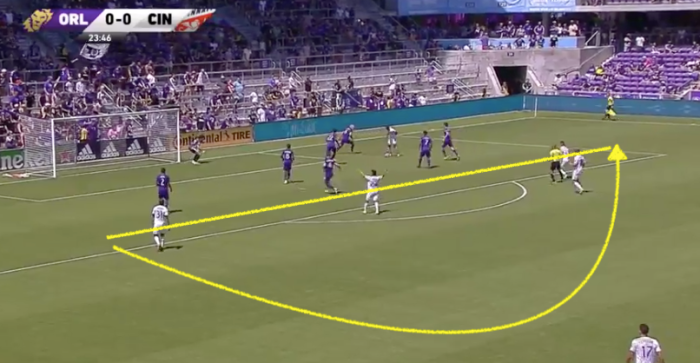 Nobody’s in the area around dos Santos and nobody’s defending in the direction of Cincinnati’s four players on the edge of the box.

Now, for a team like Orlando that is still working through its backline issues that plagued them last season it’s OK to want those numbers in the box and let opposing teams take the lower percentage shots from outside of the box, but there still should be someone, at least, out there covering that space to limit the opportunities like what dos Santos had in this match.

Always fighting from behind

Orlando City in the past has been known as being a team that’s good at coming from behind and taking points after trailing in matches. That’s great and all, but you shouldn’t have to be fighting back in every single match.

Orlando conceded first for the 10th time in 14 matches this season, a baffling stat and a sign of just how unlucky the team has been this season. The Lions aren’t playing poorly in most of the games they concede first, but they’ve been struggling to find ways back into the game.

It’s a conundrum coach James O’Connor faces with his players, saying it’s a scenario they’ve acknowledged but still expects his squad to be mentally strong whenever they go down a goal first.

“That will be one of the statistics that we’ve looked at… statistics that we think it definitely needs to be better,” he said. “I think when you concede like that, you force yourself to have a still of determination to come back and fight through it. Statistically, you can get the first goal, know it makes it a little bit easier, confidence rises [and] you got something to hang on to — not always the case.

“So the flipside happens when you go a goal down and then you have to be mentally tough. You need to make sure that you keep believing, you keep pushing and keep trying to get something. Again, the response from the players to go a goal down is exactly what we would have wanted.”

The Lions put 19 shots on LA, while the Galaxy only tested Brian Rowe four times. Yet the team with one shot on target won the game. While Orlando needs to figure out how to limit those early goals, they need to figure out how to put the ball in the back of the net too. Otherwise, they’re going to continue to struggle for wins.

Nani at the penalty spot

Nani saw another penalty kick of his saved this weekend, and that puts him at 1-for-3 this year from the spot.

Maybe it’s time to let someone else take the penalty kicks? He’s looking too predictable for goalkeepers.