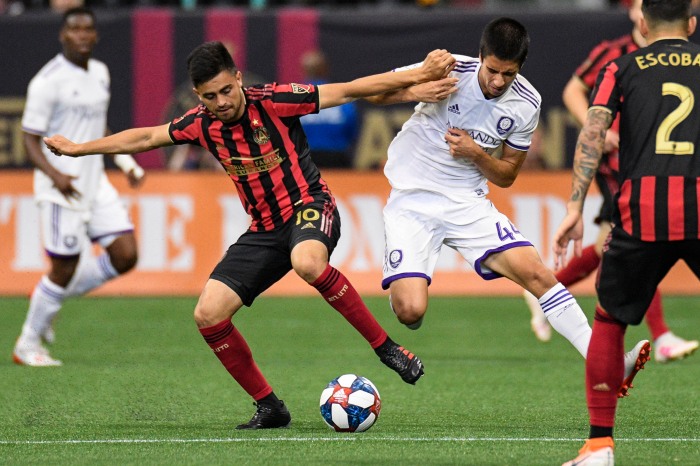 Regardless of where you stand on the “is Orlando City vs. Atlanta United a rivalry match?” debate, the simple fact of the matter is that Orlando is winless all-time in now seven matchups against their foes to the north, extending the losing streak to four straight matches with a 1-0 loss at Mercedes-Benz Stadium on Sunday afternoon.

The Lions have now dropped two straight results for the first time this season with just three goals over their last five matches, as they now sit in 10th place in the Eastern Conference on 12 points, four points back of the Columbus Crew for the final playoff spot in the East.

Orlando City won’t have much time to look back on this result with a cross-country game at Seattle on Wednesday night, so let’s look back and take a dive into the match.

Your Lions in Atlanta. 😈

The last-minute announcement of Nani’s exclusion from the match surely didn’t help ease Orlando City fans’ nerves coming into the contest, and James O’Connor worked around the absence in an interesting way, bringing the Lions back to the 5-3-2 set-up after working in a 4-3-3 over the last couple of weeks.

Alex De John and Kamal Miller returned to the starting lineup, as did Cristian Higuita, who was interestingly pictured in a more advanced midfield role, as the team would be without Sacha Kljestan for this match and using Josue Colman off the bench.

Atlanta poses a major threat up top with the likes of Josef Martinez and Gonzalo “Pity” Martinez, just to name a couple, so adding in that extra center back was a smart move by O’Connor, putting Orlando in a defensive shape with the ability to burst forward on counter-attacks and hopefully poach a goal or two.

For the most part, it worked well and the Lions actually could have come out on top if not for a couple of huge misses.

Looking at just the stats, you’d probably come to the conclusion that Atlanta handled the game throughout the full 90 minutes and probably even clobbered Orlando by a 4-1 scoreline, or something around that.

The stats favor Atlanta, but don’t tell the whole story.

Orlando saw plenty of the ball in the second half, had big chances on both side of the halftime whistle, and defended well for throughout the match. The only thing missing for them were the goals.

I’ve mentioned before in these columns that O’Connor is good at game-planning and preparing Orlando City to, at the very least, be in games, and this match with Atlanta was no different.

The lineup was good enough to challenge Atlanta, and it was how that lineup played that made the game so interesting to watch both early and late.

The Lions used a high line approach targeting Atlanta’s backline. This is something we’ve seen a number of teams in MLS do this season and have it work to their advantage. Atlanta likes to play out of the back starting with Brad Guzan, finding one of the three or four defenders and taking it from there.

In this match, Atlanta was seen constantly starting with three defenders spread out across the field, so to defend against, Orlando stuck Dom Dwyer, Tesho Akindele, and Higuita on a man to pressure the ball and try to force mistakes. 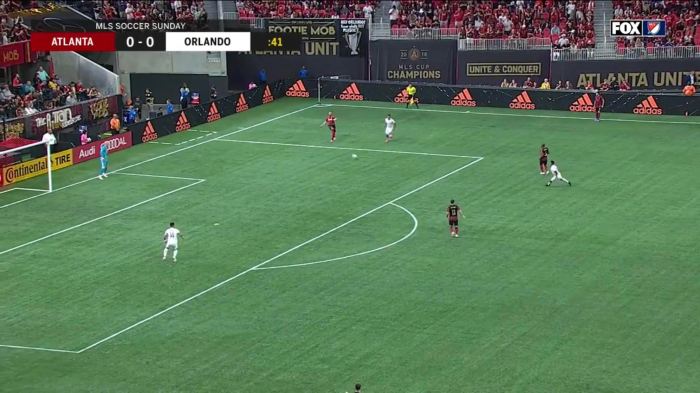 It’s not too risky because while it does tend to open up some space in the midfield, it’s not enough that it lets anyone just a rip a pass right through it.

The first snap above comes from the very first minute of the game. Lacking options, the ball is played up to Eric Remedi, who initially takes it in before losing possession to Higuita. From there, the Lions immediately have numbers and create a great chance for themselves before much of the 68,000+ in attendance have a chance to settle in. 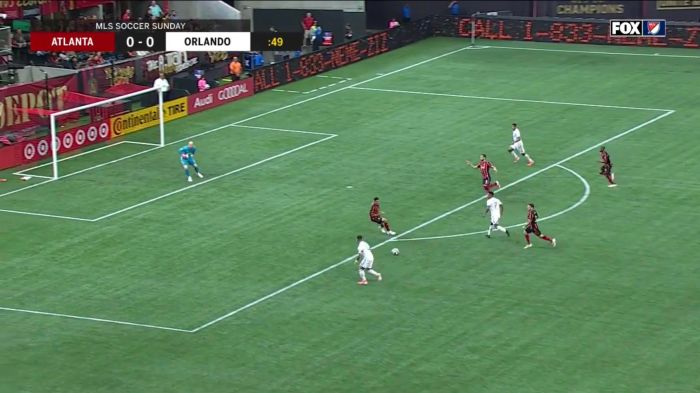 The next grab below comes in the lead-up to Atlanta’s lone goal on the afternoon, and you can see all three players pressed up and on their man, in this case, the ball is heading off towards the sideline, with Leandro González Pirez running out of room and virtually no options nearby thanks to Akindele closing him down, González Pirez boots the ball downfield and just happens to find the right spot to get the goal sequence started. 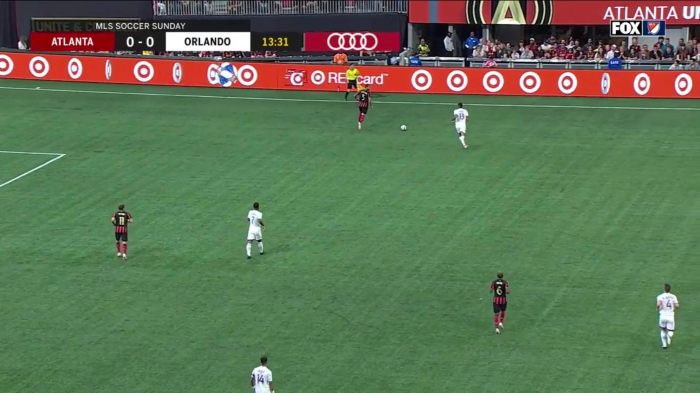 It wasn’t the ideal outcome for Orlando, Atlanta just got lucky and found the right pass at the right moment.

The thing I’ve found most interesting about Orlando City to this point is that their record and spot in the standings doesn’t truly tell the whole story about this team. They’ve come a long way in building a squad that, while it’s undoubtedly less talented than teams like Atlanta, Toronto FC, and New York Red Bulls, has managed to find a way to be in just about every game they play.

Orlando City has only lost one game by more than one goal this season, something they did 11 times last season. It not for Dom Dwyer missing a wide-open header from a few yards out against New York City, Dwyer shooting a ball off of his heel into Brad Guzan from two yards out against Atlanta, failing to defend for an extra 30 seconds in Chicago, and maybe even get that handball call on opening day against NYCFC, then we’re talking about a completely different season to this point for the Lions.

The results aren’t coming in the ways Orlando City could be seeing them, but it doesn’t mean they’re that far off. I give O’Connor a ton of credit for the job he’s done to this point, and the only thing I would say Orlando needs to do better at is simply score more goals.

Orlando is still struggling to play the ball through the middle of the park. Sunday’s attack plan, again, was built around playing through Ruan and Joao Moutinho on the wings, which the Lions were almost forced to do without Nani or Kljestan in the lineup. But Atlanta had an easy answer, swarming Orlando’s wing-backs whenever they came into possession in Atlanta’s half of the field.

Here’s every successful pass in open play throughout the match: 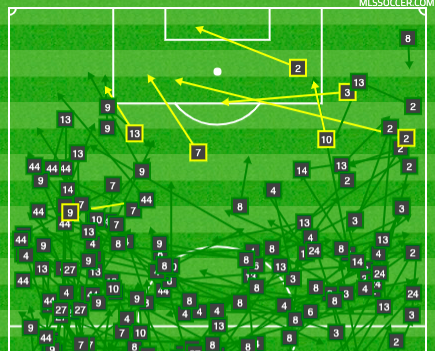 Tesho Akindele has been quietly playing well opposite of Dom Dwyer or Nani in most matches, being somewhat of a false 9, dropping back, making plays in the midfield and helping advance the ball forward all over the place.

He’s a great compliment to guys like Dwyer, whose sole mission is to get the ball and score. Akindele can score too, but unlike Dwyer, he creates chances with the ball himself playing such a constantly flowing role as the second forward. 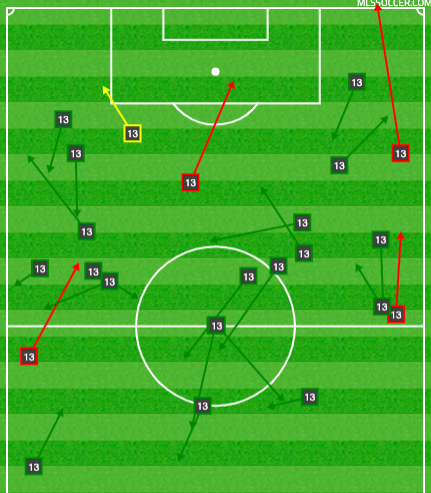