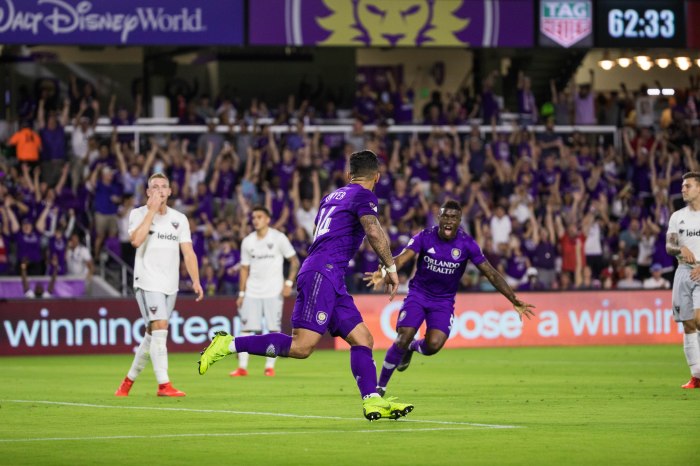 We’re now one full month into the 2019 MLS season, with five games in the book for Orlando City at the end of March following their 2-1 loss at home to D.C. United over the weekend.

And although it’s still too early to make any sweeping judgments just yet  — this is MLS after all and things can change from week-to-week — see: Montreal losing 7-1 at Sporting KC over the weekend. It’s an appropriate time to share some thoughts on the Lions, where they are, and their outlook for the rest of the season as we head into April.

1) Don’t focus so much on the results so far

Very few people — if anybody — pick Orlando City to make the playoffs at the end of the season, and so far they’re actually sitting just above the red line on 5 points and a 1-2-2 record. That’s good, and it helps that teams like Atlanta United, New York City FC, and Red Bulls have gotten off to poor starts. But take playoff standings, wins, and losses out of it for a moment and just look simply at the product on the field: it’s better. It’s a lot better than last season’s product.

The Lions have played five games this season and have arguably been the better team in four of those contests. Outside of two set-piece goals, the Lions hardly gave up anything to D.C. United on Sunday night and ultimately controlled the game and dominated throughout much of the night, especially in the final 30 minutes when Chris Mueller came on and changed the game with his hustle and energy.

Defensively, Orlando has looked good. Some bad giveaways or lapses have hurt them, but if you take a step back and look at their whole body of work up to this point, it’s been a huge improvement over 2018. The Lions have been able to play compact and stay in shape — credit to the 5-3-2 for allowing them to defend tightly in the middle and still cover ground wide — and the center back play to this point has been much better. The defensive midfield — whether it be Will Johnson and Sebastian Mendez or Uri Rosell and Carlos Ascues has put in the work as well.

The biggest challenges remain on offense and the Lions’ lack of finishing, but that’ll come in due time when the group really starts to sync up with Nani.

2) Chris Mueller should probably play more, but he’s better off the bench

We’ve seen Mueller start and we’ve seen him sub in and so far the latter is the better of the team. His performance against DCU was phenomenal and turned a lot of heads. He almost single-handily changed the game for Orlando, bringing in a much-needed spark of life and energy on to the field as the Lions were chasing two goals. He drew plenty of comments saying he should start more games, but I’m okay with this role.

Asking to start Mueller means having to change around the formation (I mean, are you going to bench Nani or Dom Dwyer?), and this team just works best right now in the five-back system, despite how lethal a Nani-Dwyer-Mueller front line would be.

Nani, 32, and isn’t going to play every minute this season, Dwyer’s going to need the occasional break, those are the chances to get him into the lineup. For now, he’s better giving you that spark off the bench, because he’s really the only one that can do it within this group.

3) They just need to finish

I already mentioned the Lions need to figure things out on offense and they rely solely on the guys taking the shots. Tom Bogart published an article on MLSsoccer.com this week highlighting many stats, one of them being “big chances” which Orlando City has created more of (12 so far) than any other club in MLS, but they’ve only converted 33.33% of those chances.

That’s important to note, and it goes right to what I’ve been shouting since Week 1: they have to make the most of their chances.

The biggest questions surrounding Orlando City coming into their season was about their defense and if it was going to be improved over last season’s. Even if it was only marginally better, that meant there would be a need to score a lot more goals this season to keep pace if they want to make the playoffs for the first time in five seasons.

Everyone’s talking about the Wayne Rooney goal on Sunday and whether or not it was a foul, but the real story should be the fact that Orlando City had 16 shots, only put five on target, and four of them went straight at Bill Hamid. There were great early chances against Montreal right before they let in two goals, there were the same opportunities against New York City in the opener. Three goals and two assists so far for Dwyer is great, but he’s could also have at least five goals or more instead.

Last year, we talked a lot about how the Lions didn’t create enough chances, now they’re creating a ton — they just need to finish them.

4) Obvious point: they need to play better at home

Orlando City has given up at least two goals in seven of their last 10 home matches going back to last season, and have gone into halftime trailing 2-0 in all three matches at Orlando City Stadium this season. That’s not good. Good teams typically win at least 11-12 of their 17 home games, and the really good teams win more than that.

What is it that makes playing in front of one of the best fan bases in MLS so difficult?

I don’t know, any of those things could be true.

With Colorado and Vancouver coming to town in April — two teams with a combined three points from nine games and a -9 goal differential this season — the Lions should be looking to feast on all three points in both of those games before they welcome both Toronto FC and the LA Galaxy in May.

A lot of people criticized James O’Connor after taking over last season and much of what happened at the end of the year was not his fault. He admitted that he tried just about everything he could think of to turn around Orlando City but it just couldn’t be done, the team was already far too lost.

So he spent the offseason looking to make changes, build a new culture, and completely change the mentality within the locker room. To this point, it looks like he’s succeeded with that.

On the field, the Lions have played much better soccer, and a lot of credit should go to O’Connor for having the team prepared and ready when they take the field. The game planning has been on point and the Lions have been able to execute on them.

Going to New York and taking all three points out of Red Bull Arena was no easy task; taking to task one of the best teams in the league in D.C. is something to be happy about despite losing; and even against New York City the Lions knew how to play again, so they went out and played exactly how they needed to.

O’Connor has his flaws, all coaches do, but he should get some due credit for how the Lions have played so far this season, even if the results haven’t unfolded.