Fresh off their first win of the 2019 campaign, and just their third under head coach James O’Connor since taking over last July, Orlando City is looking to keep the momentum going as the Lions welcome an undefeated D.C. United side to Orlando City Stadium on Sunday at 6:30 p.m. ET (FS1).

Despite acknowledging the “very tough matchup,” O’Connor said that his players are all looking for the game, a chance for the Lions (1-1-2, 5 points) to grab points at home against the top team in the Eastern Conference heading into the weekend and a team that has yet to allow a goal through its first three games this season.

The Lions are coming into the match off a 1-0 victory on the road over the New York Red Bulls last weekend, a stout performance by the Lions’ defense which held the Red Bulls to just four shots on target and picked up their team’s first shutout since September 22, 2018 — the Lions only picked up two shutouts in all of 2018.

It wasn’t a pretty win, the Lions pulled it out and are starting to see the building blocks come together for it to become something more, something that O’Connor has been talking about all preseason and to this point about a real, improved Orlando City side capable of challenging for one of the seven playoffs spots in the East this season built on a chemistry and mentality that hasn’t been there in the past.

Next up: Wayne Rooney, Luciano Acosta, Paul Arriola, and the rest of D.C. United, which came into the season riding the wave of momentum that carried them into the playoffs last season. D.C. (2-0-1, 7 points) are one of just five teams left standing without a loss so far in 2019 and are coming into the match off a 5-0 win over Real Salt Lake two weeks ago at Audi Field, which saw Rooney score his first MLS hat trick.

Even though their struggles over the years, DCU has been a source of success for the Lions over the years, having won three of the previous five matchups, including a 3-1-1 record all-time against United in Orlando. 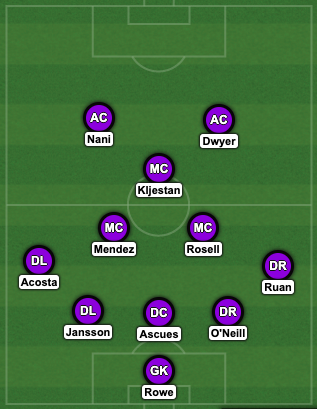 After struggling against Montreal in a 4-4-2/4-3-3 lineup, O’Connor went back to the 5-3-2 the Lions have played much better in last week against New York, with a few added changes to throw in as well.

Uri Rosell and Carlos Ascues started in the defensive midfield with Sebastian Mendez (international duty) and Will Johnson (concussion) out. With Mendez back and Johnson potentially still out,  we could see a Mendez-Rosell pairing this week with Ascues returning to the backline with Robin Jansson and Shane O’Neill. Lamine Sane came on as a sub for his first appearance of the season against the Red Bulls and could start as well, but it’s not known at this point if O’Connor is ready to go that route just yet.

If Sane does start, it could be the first look at a real first choice center back pairing for the Lions this season.

Danilo Acosta was in the 18 last weekend either, despite being healthy. O’Connor said the Lions were only watching his minute early in the year, so if nothing else is there, it would make sense to see him return to action this weekend against another tough opponent.

Keys to the Game

1) Shutdown the Rooney-Acosta connection. Those two together are among the best in the league, and that’s still not even giving credit to the other guys around them like Paul Arriola and Lucas Rodriguez, but those two work on another level when they’re clicking. Orlando is going to have to successfully defend those guys throughout the night and keep them off the score sheet if they want to walk away with three points — or even one point.

2) Better chance finishing. O’Connor has been saying since the Red Bulls game that he liked the team’s chance creating in the much, but they didn’t really create that many opportunities for themselves, and when they did there was a poor shot and bad touch that caused things to break down. Assuming that both Nani and Dom Dwyer are on the field from the start, the Lions stand a better chance to be more dangerous in the attack. They just need to find a little bit more bite this week if they’re to find goals on a D.C. defense that, as I mentioned earlier, hasn’t allowed a goal in 270+ minutes of soccer this season.