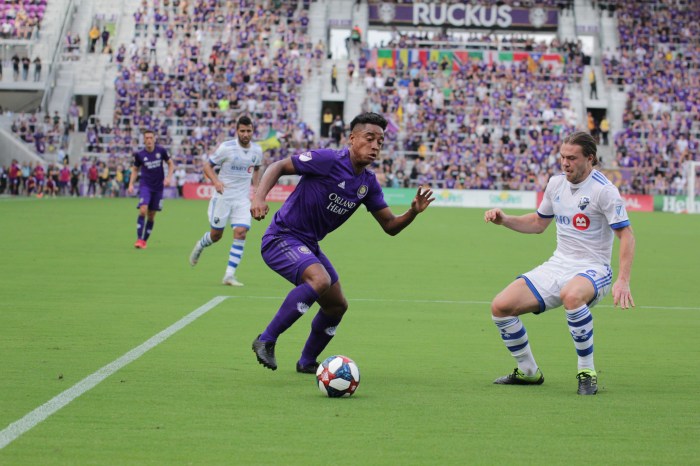 Hopes were high heading into Saturday’s match against the Montreal Impact, but Orlando City fell well short of expectations when the team let in two goals in less than 90 seconds, as the Lions would go on the lose their first match of the season 3-1 in front of 22,352 Orlando City Stadium.

Coming off two promising performances to open the season, Orlando thought Saturday would be their chance to finally pick up a win on the young season, but it all started to fall apart in the 14th minute when Oriji Okwonkwo put the visitors up 1-0, moments before Montreal doubled the lead on the ensuing kickoff when Shane O’Neill botched a back pass to goalkeeper Brian Rowe, letting Maxi Urruti set up Ignacio Piatti for his first of two goals on the day.

After the match, head coach James O’Connor jumped on the players for their lack of strong mentality after the rough start, marking it as something that he wants to see a large improvement on moving forward.

“I think when you look at the way we started the game, the first 20-30 seconds, you cannot start games like that,” O’Connor said. “If you are going to start the game like that, you need to have a stronger mentality. The big thing I spoke about there is our mentality needs to be way stronger. To play for this football club, you need to have a strong mentality that’s something that’s really evident.”

It wasn’t the first time Orlando City went down 2-0 in the first half at home this season, having done the same thing in their opening day match against New York City FC, but this time the Lions weren’t able to fight back and ended up dropping all three points.

“We have to be way stronger, make better decisions and be way tougher mentally,” said O’Connor. “If you could put yourself in a situation like that where you’re 2-nil down. We did great against New York, there was a real toughness to the performance. There was a determination to go and get after the game, but we lacked that today.”

It was blundering in the back that ultimately cost Orlando on the afternoon, making it too easy at times for Montreal to pony up shots and collect easy chances. Carlos Ascues, making his first start of the season, nearly gifted the Impact a goal less than 30 seconds into the match with a bad giveaway that lead Brian Rowe to make his first of eight saves on the day.

With heavy focus on the backline heading into the season after being the worst in league history in 2018, giving up just three goals through their first two games had been something positive to build upon, but only before the 2018 version of Orlando City came back to show its face for part of Saturday’s match against the Impact.

Montreal got off 19 shots in the match, more than twice as many as the home side did, but O’Connor isn’t putting the blame solely on the team’s backline.

“When you speak of defending people always assume it’s just the defenders,” O’Connor said. “I think if you look at the ease of which they were able to get in on reactions and just slip balls, I think they end up so many shots because towards the end we’ve made changes and we’ve got Ruan playing right-center back and we’ve got Ascues playing left-center back.”

The focus now for Orlando City shifts to the New York Red Bulls, last season’s Supporters Shield winners and the team that the Lions will face on the road Saturday at Red Bull Arena, the toughest challenged the team will face yet this season.

“I expect us to come back stronger,” said Sacha Kljestan. “I expect that we’ll come back and have a good week of training because I know we have a big game against Red Bull next week. We’ve got to react in a positive way. Bad performance tonight but hopefully we learn our lesson and do better next time.”