Two games are hardly enough of a sample size to accurately judge Orlando City to this point in the season, so with the Montreal Impact in town, this weekend for the all-important third game would be a better chance to really see who these Lions really are.

After pulling off the mask in Scooby Doo-esque fashion, it’s 2018 Orlando City!

“And we would have gotten away with it too if it wasn’t for Ignacio Piatti and the Impact’s structured, tough-to-break back line!” they shouted after the match.

The Lions got worked at home by a team that’s already traveled nearly 6,000 miles in just the first three weeks of the season, and after every positive thing we’ve been able to say about the team through the first two games of the season, Orlando City took a big step backward on Saturday in a 3-1 loss to the Impact.

The XI City boys taking on Montreal at 4:00 on my65 and YouTube TV! 😈#ORLvMTL | #VamosOrlando pic.twitter.com/SLtoiH4UP2

Orlando was really starting to get into a groove in the 3-5-2 — especially defensively, when the team really did lock-down and confidently defend Chicago for the better part of the final 70 minutes last week.

And then James O’Connor changed everything against Montreal.

The graphic above shows another 3-5-2, but it ended up being anything but. Chris Mueller started on the right side of the field, far from the left wing-back spot, which didn’t feature at all. The team flowed more as a 4-3-3 than anything else, a strange decision by O’Connor given how well the team has been playing in the 5-3-2 shape and style.

Despite an early hiccup less than 30 seconds into the match, Orlando came out confident and firing right off the bat. It looked as if it was only a matter of time until they broke through and put a couple of goals on Montreal.

But it was the Impact to score first — twice in a span of 90 seconds — then they took total control of the game, were able to lock in defensively, and completely stifled Orlando City for the rest of the match. Remi Garde‘s team was compact and knew exactly what they needed to do from letting Dom Dwyer and company from making an impact.

Check out Orlando’s passing chart for the entire game, and look at how everything coming through the midfield in open play just dies off right at the final third of the field: 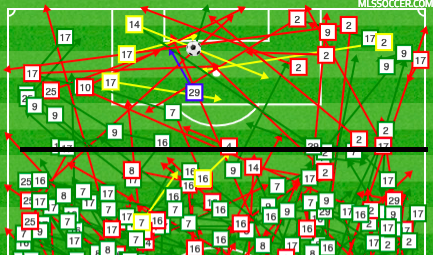 I’m not here to take any of the blame off Orlando City, but at the end of the day, you have to also tip your cap to the Montreal defense for not breaking down.

If I were to show you the game stats without any context, you probably would have imagined Orlando City went on the road to Montreal, probably tired due to travel, or short-handed due to injuries, and weren’t able to keep up with the Impact for various reasons.

But here’s the context: Orlando was at home. Montreal is playing on the road for the third week in a row. And Orlando City is very much near full strength when it comes to who O’Connor had available to him, and yet the Impact finished with twice as many shots, more of the possession, and of course, they scored more goals.

O’Connor made another interesting decision late in the second half to pull off defenders Shane O’Neill and Danilo Acosta for two more attacking players, Santiago Patino and Josue Colman. In theory, it made sense with the Lions down 2-0 at the time in the 74th minute. They needed every bit of help they could get offensively, enough so that O’Connor was willing to risk Montreal adding another goal on a backline that now consisted off just Carlos Ascues and Ruan.

Even with the added help, the Lions had just four (4) shots, including Dwyer’s goal in stoppage time, and did just as little with the ball in the final third, again a testament to Montreal’s defense.

That chart from above is everything the Lions did after the 74th minute when they had six attacking players on the field.

And then, of course, Montreal was able to take advantage of the lack of defenders on the field and bagged one more to seal the deal in the 80th minute.

Brian Rowe got a lot of complaints on Saturday too, but most of it comes unfairly. He made eight saves on the day, some of the big saves that kept the Lions in the game both early and late.

I wrote about Nani’s impact on the field last week, and it was evident again early in the game against Montreal.

Nani could have done the obvious thing and whip in a cross to Dwyer on the far post, but he held onto the ball for a couple extra touches, waits for the opportunity to get the ball to his right foot, and then sends in a good ball to Dwyer, who saw the space for better position before sending a shot over the crossbar.

Again, I said last week that watching these two link up would be fun to watch and it continues to live up to the hype. The only thing that needs to change is Dwyer burying that shot.

Danilo Acosta did everything right when it came to defending Saphir Taider ahead of Montreal’s first goal, and he even got a foot on the cross sent in towards to middle of the box. The only problem was that it fell right to Oriji Okwonkwo, who had way too much space in the middle of the penalty area to get the ball, turn and shoot.

And if you’re wondering just how Okwonkwo had the space, it all traces back to Will Johnson (moments before he came off the field due to concussion protocol), who was tracking down the middle and would have been in the position to possibly challenge Okwonkwo had he not ran out towards the right side of the field away from the penalty area when Taider began to pull Acosta out wide with the ball.

Though Johnson may have been right in preparing himself for the ball to be played back down that side, nobody stepped up to fill his space in the middle. It’s a breakdown in communication and something that Orlando is still working through early in this year’s version of the rebuild.