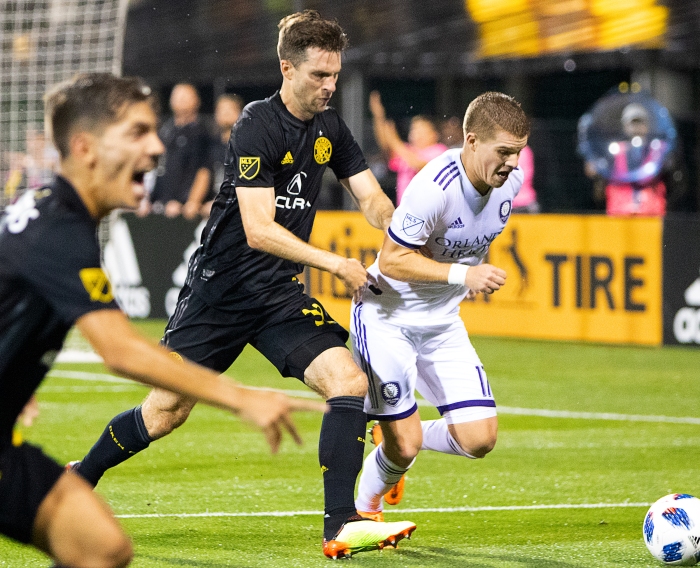 Controversy, again, impacted the Lions during a 3-2 loss to the Columbus Crew on Saturday night.

It happened late in the game when Columbus forward Patrick Mullins went down in the penalty area in the 86th minute as both him and Lions fullback RJ Allen went to head the ball.

Head referee Silviu Petrescu determined that the contact initiated by Allen was enough to call a penalty against Orlando.

Following the penalty, Columbus went on to win on a stoppage time goal from Wil Trapp, leaving Orlando City players and coach James O’Connor scratching their heads. Here’s what their thoughts were on the matter post game.

Also, courtesy of the club, here's what Sacha Kljestan had to say regarding the penalty. #OCSC pic.twitter.com/cfbYMEKPMd

Wasn’t going to say anything but after seeing the ref’s cop out comments, the worst decision I’ve ever seen, If the ref had any humility he would check VAR, if he did “check” then it’s even more of a joke! https://t.co/MRzCWDHquY

Along with current players and former players Luke Boden, Lewis Neal and Seb Hines also chimed in regarding the matter.

That penalty is one of the worst decisions I’ve ever seen a referee make. The worst part is that they even reviewed it and still came to the same conclusion. Absolutely embarrassing! #CLBvsORL

Absolute disgrace mate and who will be held accountable? Absolutely no one!

Did nobody else see the tip of Allen’s finger nail make contact with Mullins back, that led him to throw his arms in the air and fall over? 🧐👀 #shocking #decision