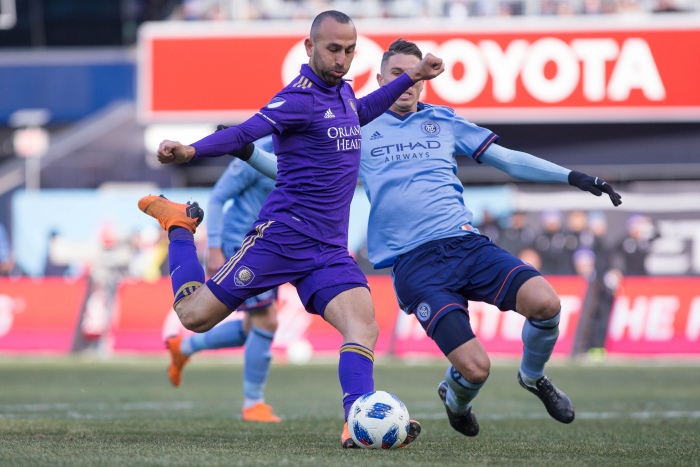 BRONX, N.Y. – Going in Saturday’s match at Yankee Stadium, the Lions were looking toward recording their first three points of the season, but two major giveaways in the second half instead cost the Lions their second defeat of the season.

“I really felt we were doing well right up until we gave them the goal. Unfortunately for me, that’s three matches where I feel like we’re giving things away,” Orlando head coach Jason Kreis told reporters after the game. “The first match we give away a goal defending a throw-in on our own end, then we end up with an ejection that was a poor decision. The second game is the same thing giving away a cheap goal. In this game, we smash the ball right in our goalkeeper and give away the first goal, so we correct those small errors, I still think we’re going to be OK.”

After a scoreless first half, Orlando substituted Jonathan Spector, who according to Kreis suffered concussion-like symptoms after colliding heads with Maxime Chanot in the 18th minute.

Tajouri gave the home side the lead in the 62nd minute when Orlando’s Yoshimar Yotun played a tough ball back to goalkeeper Joe Bendik, who then was unable to thoroughly clear the ball. Under pressure, Tajouri was able to win the failed clearance to slot the ball past the goalkeeper for the 1-0 lead.

Moralez doubled the lead in the 74th minute after Sacha Kljestan, who made his Orlando City debut, turned the ball over in the Lions’ defensive third to NYCFC’s Jesus Medina, who then connected with Saad Abdul-Salaam to dish the ball over to the Argentine for the easy finish.

It was the third time this season the Lions have failed to score first. Their first two games at home against DC United and Minnesota United, Orlando conceded within the first 20 minutes. When asked if there was some concern regarding that, Kreis felt his side on Saturday addressed that issue, but ultimately it was the second half mistakes that cost Orlando three points.

“For me, the first two games, the first 20 minutes we’ve been put kinda on our back foot for no particular reason, and in those 20 minutes, we gave away a goal, so tonight I felt like the first half coming in here was a positive thing,” said Kreis. “We started the second half, created a few things, but unfortunately we have the big mistake that causes the goal.”

After a busy offseason that saw almost 13 players arrive to the club, the Lions have not started the 2018 MLS season as expected. Despite it’s bad start to the season, Kreis indicated the team needs at least one result to turn things around for them.

Without a win yet this season, Klestan said after the game the pressure to win has been there before the season started, but the team will have to turn things around before it’s too late.

“We have pressure on ourselves already. We’ve had pressure since day one,” said Kljestan. “All the guys on our team know that we’ve built this team to be a win-now type of team this season. We can’t wait too long to get things kick started before we put ourselves in too deep of a hole. The pressure is on, we know it. We gotta do a little bit better, everybody has to step up and everyone has to do more.”

Orlando will have a bye-week coming up, but returns to action on March 31 when it hosts the New York Red Bulls at Orlando City Stadium at 1 p.m.

Here’s how the Lions lined up:

Sacha Kljestan, Cristian Higuita and RJ Allen made their first start for Orlando on Saturday at Yankee Stadium.

As a result, Scott Sutter was deployed to the bench, and Josue Colman, who’s been nursing a quad injury for most of preseason, made his first appearance in the bench on Saturday.