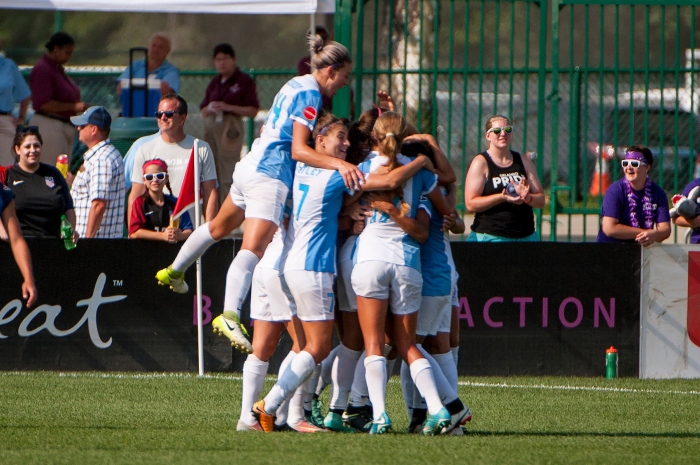 The Pride are on their best winning run in franchise history.

Goals from Chioma Ubogagu and Alex Morgan rallied the Orlando Pride (9-6-5, 32 points) to a 2-1 road victory over FC Kansas City on Saturday at Swope Soccer Village.

“We always knew it was going to be a difficult game. They are a good footballing side that just won three games in a row. Their confidence was high and they were playing at home. We knew it was going to be a tough game and it turned out that way,” Pride head coach Tom Sermanni said.  “In fairness, I think we dictated the play for most of the game apart from the seven minutes of stoppage time when we were under some pressure as [Kansas City] pushed to equalize. Apart from that, we dictated most of the game, most of the play and I think we deserved to win the game.”

Chi gave the Pride the lead in the 16th minute, but Lo’eau LaBonta equalized the game for KC in the 42nd minute after converting a volley from Shea Groom past Orlando goalkeeper Ashlyn Harris.

Morgan’s eighth goal of the season in the 87th minute clinched the win for the Pride after finishing a free-kick service from Marta in the closing minutes of the game.

Morgan has scored six goals in her last seven games.

The Pride are now on a franchise-best five games unbeaten streak.

The Pride are back in action when they host the Boston Breakers at Orlando City Stadium on Saturday at 7:30 p.m.

Here are the match highlights: