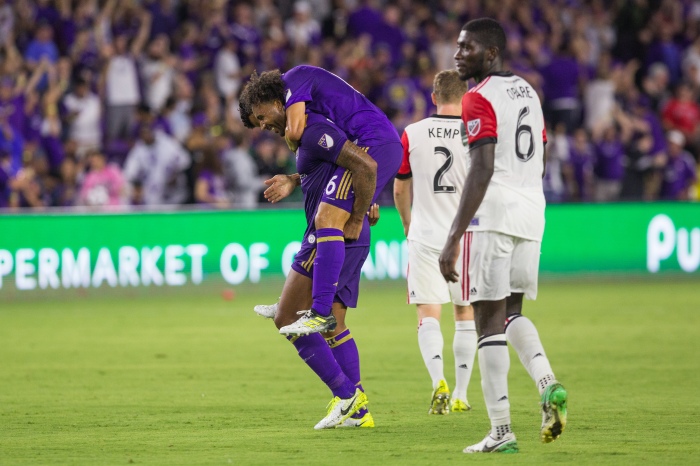 Second half goals from Cyle Larin and Giles Barnes, and a crucial late-save from goalkeeper Joe Bendik, snapped Orlando City’s six-game winless run to claim a 2-0 victory over DC United on Wednesday at Orlando Stadium.

After a scoreless first half, Barnes’ substitution into the game near the hour mark proved to be the game changer for the Lions, said Kreis.

The Jamaican international drew a foul outside the box, making way for Will Johnson to set up Larin, who scored the opener in the 66th minute after heading in the free kick from his fellow Canadian compatriot.

DCU (4-7-2, 14 points) were on the verge of leveling the score in the 74th minute when Jose Aja’s giveaway found United forward Lamar Neagle, who then beat Bendik on the one-on-one. With an open net, Neagle’s shot at goal was then blocked by Orlando defender Jonathan Spector and when it looked like Sebastian Le Toux was bound to head the rebound, Bendik rushed to punch the ball out of the goal line.

“It was pretty key as a turning point in the game,” Spector said. “They had a couple chances just before that, which they didn’t take. That kind of turned the game in our favor. It was pretty important and change in momentum.”

Barnes’ impact followed. After two attempts, it was his third that found the net after he rifled a powerful shot from long range only to slip off Bill Hamid’s hands into the net to double the lead in the 88th minute.

“I just wanted to come in and make an impact,” said Barnes. “Jason [Kreis] to be fair, has been really good with me. He’s been telling me that I need to be a little bit more selfish, so that’s what I’ve been doing at practice … it became a habit.”

Antonio Nocerino and Tony Rocha were the other used substitutes for the Lions, coming in the 73rd and 82nd minute for Matias Perez Garcia and Carlos Rivas, respectively.

Kaka missed a second consecutive game after Kreis ruled him out for the DC United game for an apparent calf injury the Brazilian suffered during the New York City FC game on May 21.

Orlando City is back in action on Sunday when it hosts the Chicago Fire at 7:30 p.m.