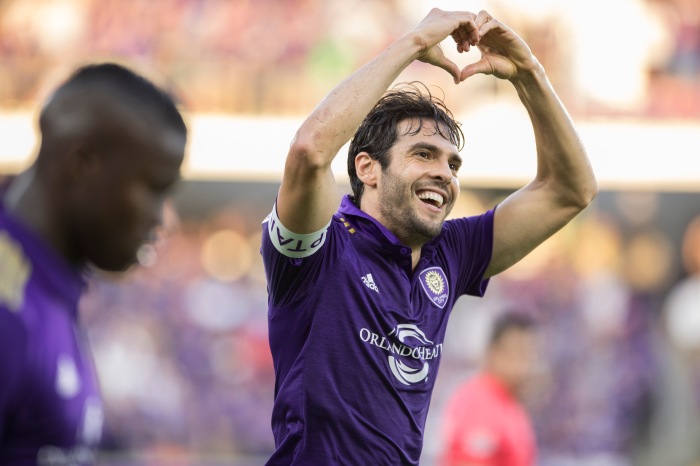 Cyle Larin and Kaka’s first half goals weren’t enough to secure a sixth straight win in front of a sell out crowd of 25,527, as Blessing’s goal in the 73rd put Sporting KC even with Orlando City, giving the Lions their first home draw of the season.

“We made sure we got back into the game,” said Larin about bouncing back from the early goal. “We’re home and we don’t want to lose here and everyone wanted to keep going and get the crowd into it. When we went down 1-0, we came back and we kept putting pressure on them.”

Larin tied the game at 1-1 in the 16th minute of the match after he finished a cross into the box from Carlos Rivas, Karina goal came seven minutes after Blessing opened up the scoring with a goal of his own in the 9th minute of play.

Kaka put the Lions in the lead 10 minutes later when he controlled a cross from Scott Sutter and finished for his 3rd goal of the season.

“He’s been showing up at the right spots at the right time,” said Orlando City manager Jason Kreis about his squads captain. “Tonight’s goal was a special one, in that much traffic to take it down the way he did and calmly place it around the defender into the far post, there’s not too many players that are capable of those types of goals.”

Blessing tied the game at 2-2 when he cleaned up a Joe Bendik save off a Benny Feilharber shot to get his second goal of the match. Blessing was subbed off in the 81st minute to cap off his two-goal night.

Jose Aja thought he put Orlando City ahead in the 75th minute when he headed a goal off a Will Johnson corner kick, but the goal was quickly disallowed after the referee ruled the ball had gone out of bounds  before it made it to the center back.

While the Lions were hoping to continue the winning streak at home, multiple players stated that while they came into the match looking for three points, the players are happy to come away with at least one point after suffering back-to-back road losses.

“We came looking for the win at home,” said Aja after the match. “But the important thing is we didn’t lose it.”

The draw brings Orlando City’s record to 6-3-1 with 19 points for the season, but the Lions remain undefeated at home despite having their five -game home winning streak snapped.

Orlando City will now travel to San Jose for a mid-week matchup against the Earthquake on Wednesday before returning home to try and  start a new home winning streak on Sunday, May 21, when they take on New York City FC  at 7 p.m. at Orlando City Stadium.

“We want three points when we’re at home, so it does feel a little bit like a failure,” said Kreis following the match Saturday. “But I still think the performance was a strong one.”