Ashlyn Harris is a confident individual.

And she rightfully has every reason to be exactly that after a shutout performance that kept the Orlando Pride unbeaten at home after a 2-0 victory over the Seattle Reign on Sunday afternoon at Camping World Stadium.

“Confidence is something I don’t lack,” Harris said. “I’m sure most of you know that by now. Being a goalkeeper takes a different mentality. You can’t be soft, you can’t be quiet, you need to own your space, and you need to demand a lot and have a vocal presence. That’s what I have to bring every day.”

Harris currently leads the league with 15 saves, a feat shared with Alyssa Naeher of the Chicago Red Stars.

The Satellite Beach native only finished with two saves Sunday, but one of them was a crucial jaw-dropping save that looked as if it was going to beat her. Beverly Yanez’s chip from outside the 18-yard box forced the Orlando goalkeeper to make a game-saving fingertip save, which then hit off the crossbar in the 82nd minute.

“People question when I step inside the 18, they know they’re going to have to hit something well to beat me,” Harris said. “Nothing is given in this league, and you have to work for everything, every point, every shutout, every clean sheet — whatever the case is.” 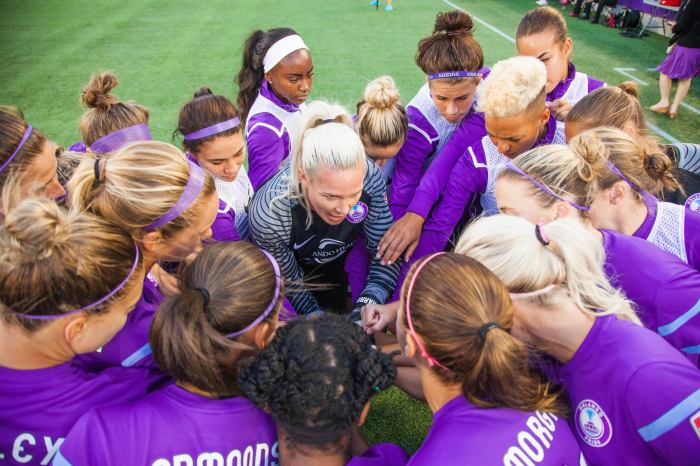 Her heroic save kept Orlando in the lead. People could even argue it should belong in a highlight reel or even a nominee as save of the week.

For Harris, though, she’s just doing her job.

“At the end of the day, I don’t want save of the week,” she added. “I don’t want to have to make a save. If my players in front of me are doing what they should, I shouldn’t have to make 10 saves a game. It shouldn’t be a highlight reel every single game if everyone is doing their job too. I point at myself too because there’s breakdowns, and I have to see it before it happens and if I’m not seeing it and communicating, that’s on me.”